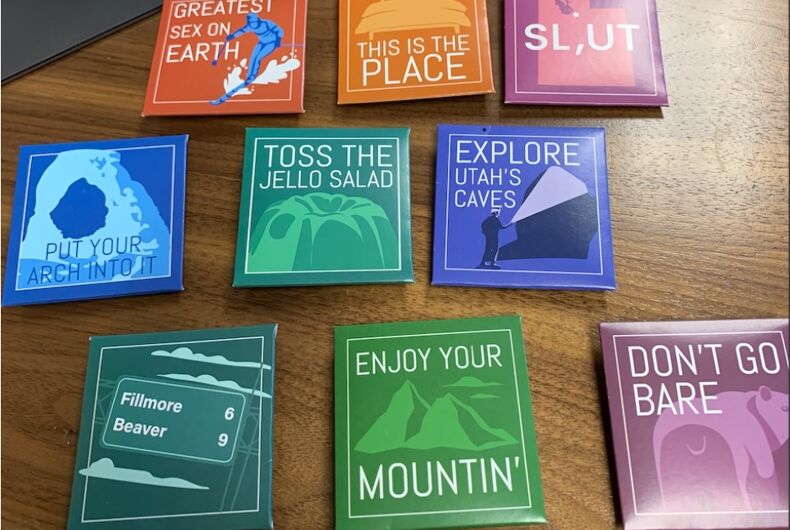 The state has not said what would happen to the tens of thousands of condoms that didn't get distributed.Photo: Utah Department of Health

The governor of Utah has ordered the state to stop handing out condoms that are part of an HIV-prevention program because, he said, the campaign promoted “sexual innuendo.”

The Utah Department of Health’s Prevention Treatment and Care Program wanted to distribute 100,000 condoms in order to lower HIV transmission rates in the state as part of their “The H is for Human” campaign. They hired Love Communications, an advertising firm, to come up with punny, sex-positive messages for the condoms’ wallets, in order to get people to take them and talk about them.

One of the messages on the condoms was “SL, UT,” a play on Salt Lake City, Utah. Another said “Enjoy Your Mountin'” and had an image of a mountain, a reference to Utah’s landscape. Others said “Uintah Sex?” “Explore Utah’s Caves,” “Put Your Arch into It,” and “Don’t Go Bare,” with an image of a bear.

“The Governor understands the importance of the Utah Department of Health conducting a campaign to educate Utahns about HIV prevention,” said a spokesperson for Gov. Gary Herbert (R) in a statement. “He does not, however, approve the use of sexual innuendo as part of a taxpayer-funded campaign, and our office has asked the department to rework the campaign’s branding.”

The campaign was funded with both state and federal money and was modeled after successful programs in other states like Alaska and Wyoming that used local humor to promote awareness around HIV and safer sex.

Michael Sanders is a volunteer in the state who was distributing the condoms when he was told to stop.

Sanders said that he would take the condoms to LGBTQ spaces like community centers, bars, and shows in order to help get the message out to queer people.

“I was on my way to the University of Utah when I got word that it was about to be shut down by Governor Herbert’s office,” he told KUTV.

He said that he called the governor’s office to ask about the message, and when they returned his call “I was told it was an inappropriate use of taxpayer dollars,” he said.

“If the condoms are fun, relatable, sex-positive — people are more apt to talk about them, which we’ve already seen,” said Erin Fratto of the Utah Department of Health after the condoms were pulled.

But the Utah Department of Health issued a statement apologizing for the campaign.

“The designs did not go through necessary approval channels and we have asked our partners to stop distributing them immediately,” the statement said. “We regret the lewd nature of the branding. We remain committed to running a campaign to help in the prevention of HIV and intend to do so in a manner that better respects taxpayer dollars, and our role as a government agency.”

Christian conservative leader Franklin Graham is going to visit Key West. So I wrote him a letter.