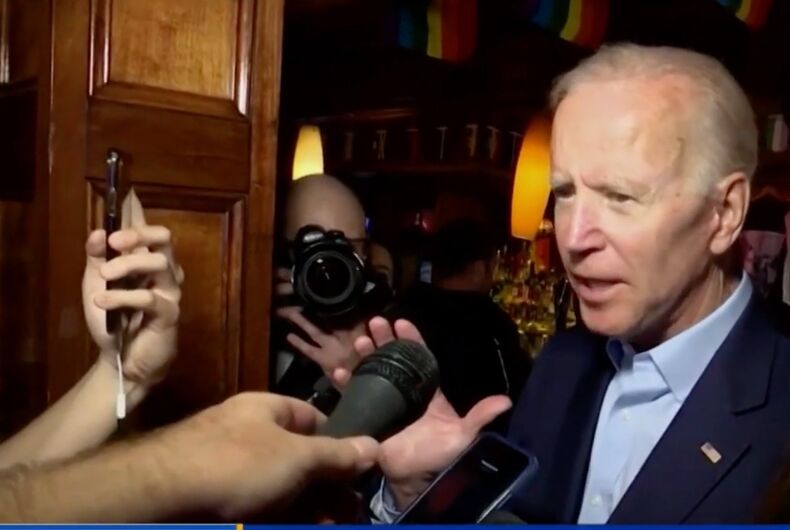 Former Vice President Joe Biden dropped by the Stonewall Inn as he campaigns for President.Photo: Screenshot

Former Vice President and current presidential candidate Joe Biden made a swing through the Stonewall Inn yesterday and bought the surprised patrons a round of beers.

Biden, who famously announced his support of marriage equality shortly before President Obama did and is credited with nudging the former President to announce his own “evolution” on same-sex marriage, was in New York City for fundraising events.

“Look,” Biden said during his visit, “this is where it started. The ultimate civil rights argument today is how can you be constitutionally able to marry and be fired in three dozen states when you walk in? It’s wrong. It’s simply, simply wrong.”

Mark Segal, the publisher of Philadelphia Gay News and a Stonewall veteran, happened to be in the bar when Biden dropped by. “If you would have suggested something like this 50 years ago, the 18-year-old me would think you were an alien,” Segal told NBC News.

While Biden voted in favor of the Defense of Marriage Act in 1996, when asked about marriage equality in a 2012 interview, he replied, “I am absolutely comfortable with the fact that men marrying men, women marrying women and heterosexual men and women marrying one another are entitled to the same exact rights, all the civil rights, all the civil liberties,” Biden said in 2012 when asked about marriage equality.”

“Quite frankly, I don’t see much of a distinction — beyond that.”

Obama’s stance for equal marriage rights was muddied by his support of marriage equality as a state legislator, but retreat back to civil unions when he ran for federal office. Shortly after the interview aired, Obama announced his own change of heart.

Taylor Swift recently had a surprise performance at the historic launching pad for the modern LGBTQ rights movement. Presidential candidate Beto O’Rourke has also made an appearance to glad hand patrons.

Stopped by @TheStonewallNYC to celebrate #PrideMonth & #WorldPride where the movement began 50 years ago. pic.twitter.com/2Z4PyfzyOq

For all the hard-won progress, for as much as we can celebrate how much better things have gotten — this fight is not over.

We have to come together to stand up to abuses of power, ensure that everyone is treated with dignity, and fight for full equality. pic.twitter.com/aCoWE0hggC