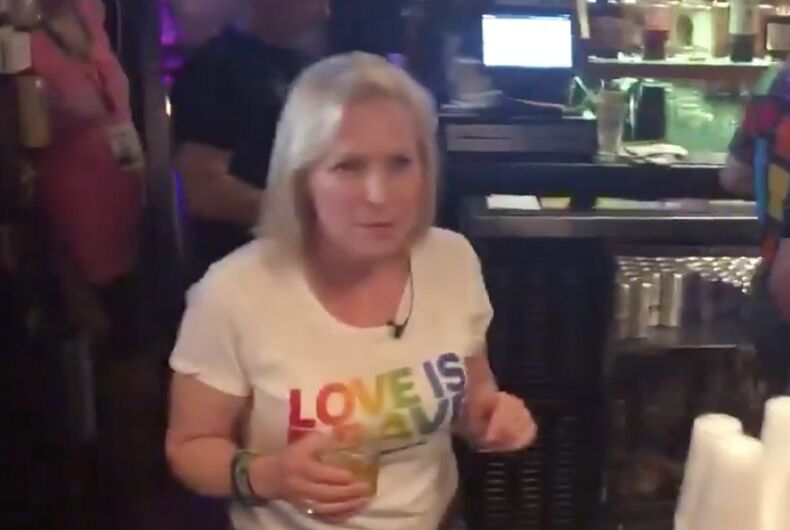 Kirsten Gillibrand serves up a drink while bartending at The Blazing Saddle before Des Moines' Pride weekend.Photo: Twitter screenshot

A month after partying with drag queens at the Des Moines, Iowa gay bar Blazing Saddles, Senator Kirsten Gillibrand returned to the bar to serve drinks as part of the city’s Pride weekend celebration. She also went shopping for Pride gear with Pete Buttigieg’s husband, Chasten.

The Hill reports that Gillibrand answered questions while slinging cocktails at the bar on Friday. When one person asked for her favorite drink, she just handed him hers. He later remarked that it was straight whiskey.

Related: How Chasten Buttigieg overcame homelessness after his family rejected him for being gay

She also joined Chasten earlier in the day to buy some rainbow-colored clothing at the Des Moines-based store Raygun. Here are some pics from her Friday in Des Moines.

Guy asks @SenGillibrand what her favorite drink is to order it, just gets handed hers instead
“It seems like it’s just whiskey straight!” he says #IACaucus pic.twitter.com/KnOuawvZig

You may recall that Gillibrand actually visited the bar in late April. During that visit, she joined drag performers in their dressing room and wrote, “I felt underdressed, so I brought a dress I picked up yesterday — turns out it fit me, but it fit Vana (a drag performer) even better!”

Vana, the drag queen, greeted Gillibrand yesterday as the Senator entered the bar. Here’s video of their embrace:

Gillbrand’s visit also comes just days after the recent release of her ambitious LGBTQ rights agenda in which she outlined numerous policy changes and added:

“LGBTQ Americans deserve a president who will always stand with them and protect their civil rights — without hesitation. Unfortunately, what they have right now is a bigoted, cowardly bully who makes the LGBTQ community more vulnerable…. I’ll push for proactive policies to ensure all Americans can live free from discrimination and bigotry based on their gender identity or sexual orientation.”

After working as an attorney and an upstate New York Representative in the U.S. House during 2006, Gillbrand won a special election in 2010 to fill Hillary Clinton’s Senate seat after Clinton resigned to become Obama’s Secretary of State the year before. Gillibrand won re-election to that seat in 2012 and 2018 before announcing her candidacy for U.S. president earlier this year.