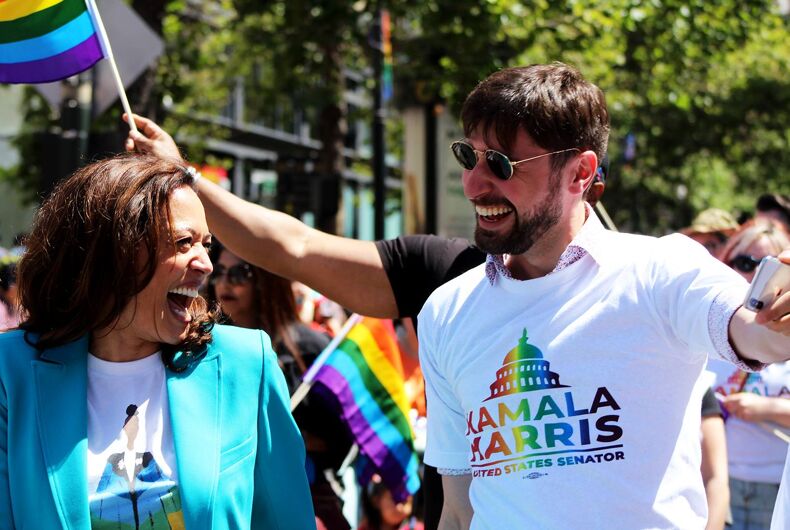 In choosing Sen. Kamala Harris as his running mate, Joe Biden has picked the safest candidate–if you can call putting the first black woman on a national ticket safe. And while all of Biden’s possibilities had strong LGBTQ records, Harris certainly stands out.

Harris checks all the boxes for a vice-presidential candidate. She’s a Senator, so she knows Washington. She ran her own presidential campaign, so she’s been through the media wringer. She’s even great on the attack, as anyone who has watched her during Senate hearings knows and Biden experienced first hand as a target himself.

Related: Joe Biden’s lead with LGBTQ voters is so massive even Republicans are planning to vote for him

“You make a lot of important decisions as president. But the first one is who you select to be your Vice President. I’ve decided that Kamala Harris is the best person to help me take this fight to Donald Trump and Mike Pence and then to lead this nation starting in January 2021,” Biden wrote in an email from his campaign to supporters.

While no one could surpass Sen. Tammy Baldwin, the first out lesbian in the Senate and another rumored candidate, Harris has effectively been campaigning for the LGBTQ vote for years. Once she was admitted to the bar in 1990, she started a long career as a prosecutor, first as an assistant prosecutor in the Bay Area, then as San Francisco’s District Attorney and finally as the California State Attorney General.

As San Francisco’s district attorney, she created a special hate crime unit focused on crimes against LGBTQ children and teens. She pushed for legislation to ban a gay/transgender “panic” defense and to ban conversion therapy for minors.

As a Senator, Harris made Brett Kavanaugh squirm during his confirmation hearings by questioning him intently on marriage equality.

During her presidential campaign, Harris made many of the same pledges that the other candidates did, including prioritizing passage of the Equality Act, reinstating Obama-era protections, and vigorously pursuing hate crimes. Perhaps her most newsworthy moment on LGBTQ issues came when she dismissed the idea of widespread homophobia in the black community as a “trope.”

“The reality is that, sadly and unfortunately in all communities, bias occurs, and in particular homophobia and transphobia,” she explained. “But to label one community in particular as being burdened by this bias as compared to others is misinformed, it’s misdirected and it’s just simply wrong.”

In picking Harris, Biden is sending a strong signal about the future of the Democratic party as younger and more diverse than the Republicans. He’s also setting Harris up as his potential successor. At age 78, Biden could well be a one-term president, and his vice president has a higher than usual chance of assuming office during the first term.

As all Biden’s choices did, Harris comes with baggage. Her campaign got off to a rousing start and then fizzled. She wasn’t the greatest campaigner, and her staff was riven by factions.

Although she is multi-racial (her father was black and her mother Indian-American), progressive critics have hammered Harris for her past role as a prosecutor. Some older male Biden advisors, like former Pennsylvania Gov. Ed Rendell, plainly dislike Harris, accusing her of being too ambitious–a bizarre and offensive claim to make about any politician, particularly a woman of color.

The symbolism of Harris on the national ticket can’t be underplayed. However, the practical effect of her nomination is an open question. It’s not like California is a battleground state.

At the margins, the choice of vice president doesn’t make as much difference as pundits suppose. The choice is seen as a reflection on the presidential nominee’s outlook; a bad choice, like John McCain’s elevation of Sarah Palin, can hurt. But even a lot of Democrats would have to take a few seconds to recall Hillary Clinton’s running mate. (It was Tim Kaine.)

Voters are generally looking to the top of the ticket and, in the case of the 2020 election, the performance of the incumbent. For example, Mitt Romney chose Rep. Paul Ryan as his running mate in 2012, in the belief that Ryan would help Republicans carry his native Wisconsin.