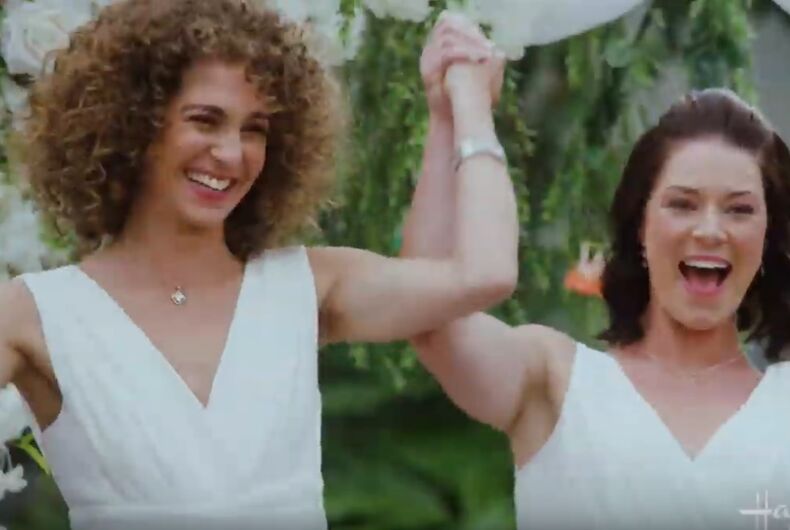 A romantic movie on the Hallmark Channel set to air this weekend will show a lesbian wedding, and Christian conservatives are freaking out over it.

The movie – Wedding Every Weekend – isn’t a queer love story; the plot focuses on a man named Nate and a woman called Brooke who attend four weddings in four weeks.

Related: Conservative Christians calls for a boycott of Disney over DuckTales episode

Nate and Brooke aren’t looking for a relationship and they don’t want their friends to set them up with dates at the weddings, so they agree to go together as “wedding buddies.”

“But what starts as friendship soon becomes deeper,” Hallmark’s description of the film says.

One of the weddings they attend, according to publicity pictures posted on Hallmark’s website as well as the movie’s trailer, is a wedding for two women.

LGBTQ fans of the Hallmark Channel have been asking them for a queer love story for a while now, and Wedding Every Weekend at least acknowledges that LGBTQ people exist. Which is too much for the Christian scolds at One Million Moms (OMM).

And now they’re mad at Hallmark for showing a lesbian wedding.

“The once conservative network has recently caved to LGBTQ pressure and has done a one-eighty from the wholesome content the channel once aired,” the group complained on its website.

OMM has a petition for people to sign saying that they’re boycotting all Hallmark products – “This includes Hallmark Channel, Hallmark wrapping paper, greeting cards, Christmas ornaments, etc.” – as long as it the channel “surrenders to the LGBTQ agenda and airs controversial topics.”

“Unless Hallmark realizes the mistake it has made by caving to LGBTQ activists’ groups, my family will have no other choice than to boycott Hallmark,” the petition says.

OMM claims to have over 60,000 signatures so far on the petition.

OMM is a project of the American Family Association, an SPLC designated hate group based in Mississippi. The group has been making wild accusations against LGBTQ people for years, like saying that gay people are “harmful… to children” and that being gay is like smoking in that “homosexual behavior’s ‘second hand’ effects threaten public health.”

Wedding Every Weekend will debut on Saturday, August 15. The trailer is below.