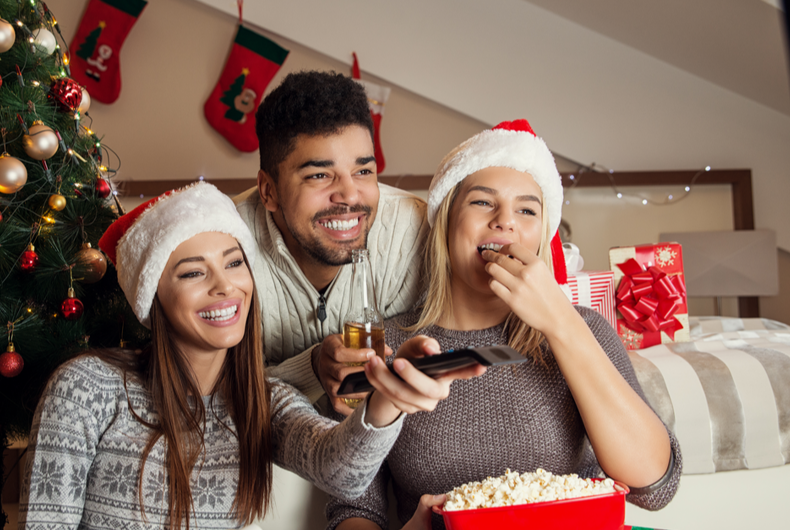 Like me, I’m sure you’re beginning to think about the holidays. The Hallmark Channel and Lifetime are already running holiday romance movies 24/7, and they are attempting to be more diverse and inclusive. Not only do they have holiday movies for the Black community this year, they even have one that has a Jewish storyline. Wonder if they have a Chanukah bush?

So, Hallmark and Lifetime, how long are we going to have to wait for that LGBT holiday romance movie? After all, the channels will produce at least 32 new movies each for the holiday extravaganza — 64 films between the two of them. Netflix, Amazon Prime, Apple TV and other streaming services also add to the holiday-movie producing spectacle with many of their own. We don’t exist in them, but we should, since the demographics, ratings and advertising dollars for LGBT shows are already there.

GLAAD recently reported in their Where We Are on TV Report that “Broadcast television exceeds GLAAD[‘s] Challenge in just one year as percentage of LGBTQ series regulars reaches all-time high.” Take a look at how well LGBT characters are doing on TV. Is there any question that Mitchell and Cameron, the gay couple on Modern Family, is why that show has high ratings? Same for Will & Grace.

In daytime, Ellen is queen. There’s nothing that controversial about LGBT characters on TV any longer. Even in the news realm, Rachel Maddow is consistently leading the ratings of cable news. Every TV network and cable outlet has LGBT reporters, and there are several gay male meteorologists you hear from before you finish your morning coffee.

At the movies, the money is rolling in — three movies last year with major LGBT characters made over $100 million at the box office. Universal Studios even has a program to increase LGBT participation on screen and behind the camera.

Hallmark and Lifetime movies are so formulated that you can tell which channel you’re watching based on the structure of the plot lines. On Hallmark, a couple meets, begins to fall in love, and each person knows that they’re perfect for the other; then, a dramatic moment when the two are about to have their first kiss is interrupted by someone. In the end, the audience has to wait until the last scene to have that first kiss. On Lifetime, the first kiss comes at about the 90-minute mark, and more of the story line follows.

Which demographics are waiting breathlessly for those kisses? Women and gay men. So ratings won’t be hurt. The competition to witness the first gay kiss will most likely make it a hit. As for advertisers, they’re already there. Can you imagine Target, to name one, pulling their Hallmark advertising budget over a gay kiss? The reality is new advertisers want to be in on the event, and even if not, the backlash would be too much to overcome.

The formula you have, we all love, and it will work just as well for a gay couple. We can wait 90 minutes for a first kiss. We can even wait two hours, as long as it’s between people like us. So, Hallmark, Lifetime: How about a gay Christmas in 2020?

Here are the queerest items on Amazon this holiday season

Danica Roem has an agenda. She’s going to fix the roads & advance equality.