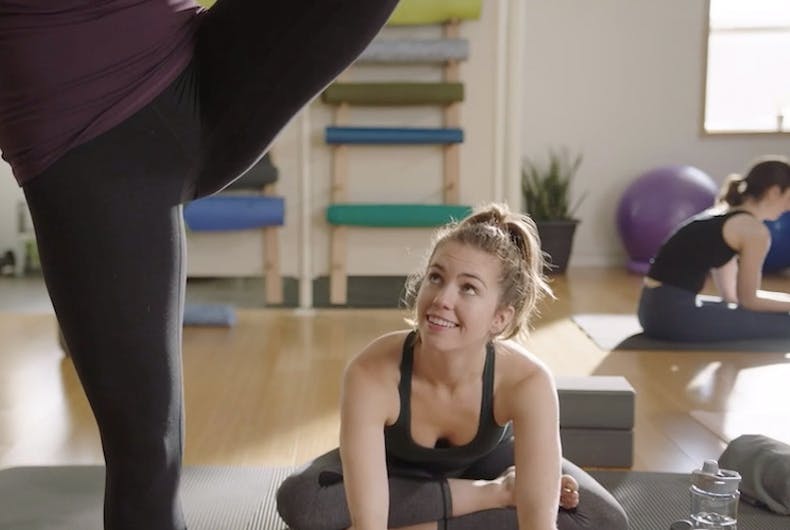 One Million Moms, the astroturf Christian group that protests anything they find even remotely titillating, has launched its latest campaign against an over-the-counter yeast infection medication called Femiclear because the product’s latest commercial features a woman at yoga who has a singing (ahem) “hoo-ha.”

The group is a stand-alone project of the American Family Association, an anti-LGBTQ hate group that masquerades as a Christian charity.

In the commercial, a blonde female yoga student stretches her legs open and the sound of “La-la-la-la-la-la!” springs from between her legs, causing her brunette classmate to look over in surprised interest. As the singing continues each time the blonde strikes other leg-spreading poses, she announces that she treated her yeast infection in two days with “all-natural and organic” Femiclear.

“So instead of chemicals,” the blonde says, “my hoo-ha is full of joy.” The brunette smiles as she looks towards the blonde woman’s singing genitals.

“The camera zooms in for close-up shots of her crotch to confirm that the singing is definitely coming from between her legs…. This vile commercial is airing during prime time when children are likely watching television… Family viewing time is ruined. Can you imagine what goes through the mind of a child when he sees this ad?

FemiClear chose to air this commercial, knowing it would be controversial. We all know children repeat what they hear. There is nothing funny about kids saying ‘joie de hooha!’ FemiClear should be ashamed! FemiClear may push away customers if it continues advertising in a repulsive manner that offends parents.”

OMM is urging FemiClear to pull the commercial, but why would they, especially now that OMM has provided them with so much free press and attention?

Caroline Goodner, the CEO Organicare (the makers of FemiClear), released the following statement in response to OMM’s outcry:

“The truth is, yeast infections are a very real part of life. According to Mayo Clinic, they happen to 75 percent of women at least once in their lifetime. They aren’t fun, but we hope to lessen the stigma and secrecy around them by starting an honest conversation about women’s health. We don’t intend to offend in any way, but rather to show that yeast infections happen to many of us and there is a natural, organic and highly effective treatment that will cure your infection. Our goal is to bring joy to women and to this women’s issue as we help them get back to what they love as fast as possible — we believe we’ve communicated just that through this ad.”

OMM has a habit of picking on high-profile TV shows, movies, magazines and commercials that spark their moral outrage. In the past, OMM has launched campaigns against Parents magazine for featuring a same-sex couple, an anti-smoking ad that mentioned erectile dysfunction, Highlights magazine for acknowledging the existence of gay people, Scholastic books for featuring LGBTQ-inclusive children’s books, the Roseanne reboot for featuring a non-binary child, a Disney cartoon series for its brief scene of two men kissing, a Zales jewelry commercial for featuring a lesbian couple and the fairy tale drama series Once Upon a Time for showing a lesbian kiss.