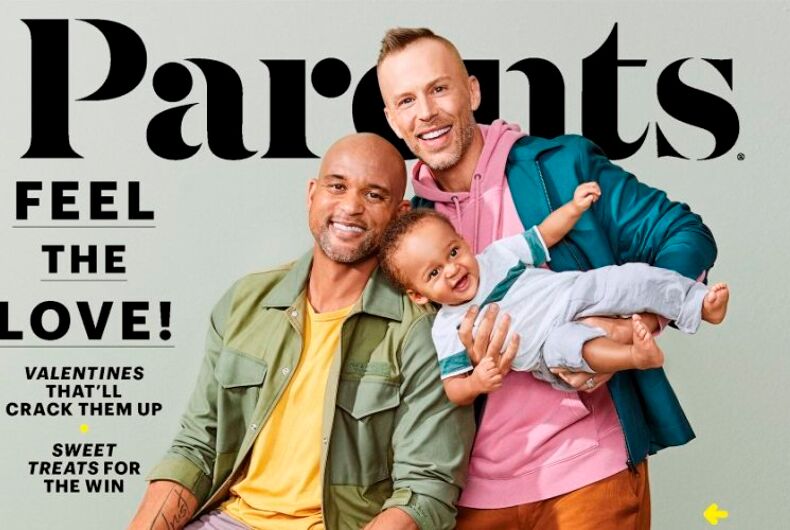 Christian conservatives are outraged at that the cover of Parents magazine this month will feature a gay couple and their children.

Shaun T. Fitness, a fitness motivational speaker, his husband Scott Blokker, and their twins, are on the cover of Parents magazine. The magazine is also running a feature piece about their many attempts to have kids through surrogates.

They are the first same-sex parents featured on the cover of a magazine that has been around for almost a century.

Fitness pro @ShaunT and his adorable family star on our February cover, our first-ever to feature same-sex parents. ❤️❤️❤️

One Million Moms, a project of the SPLC designated hate group American Family Association, is horrified that a magazine about parents would feature a story about two parents and their attempt to become parents, saying that it promotes “the pro-homosexual lifestyle.”

“Mothers and fathers are seeing more and more similar examples of children being indoctrinated to perceive same-sex couples as normal, especially in the media,” an unsigned blog post on One Million Moms’s website says.

Even though around 1,000 issues of Parents magazine have been made, only one has had a same-sex couple on the cover. Apparently serious under-representation is equivalent to indoctrination.

And if you weren’t scared enough, One Million Moms wants you to know that you can’t escape Parents‘s agenda even if you don’t subscribe to their magazine or read their website.

“It could be displayed in waiting rooms of dentist and doctor offices, where children could easily be subjected to the glorification of same-sex parents,” the blog post says.

One Million Moms has a petition up so that people can easily say that they’re “offended.” It has over 6,600 signatures so far.

Here are the most popular gay bars in the United States

She had a choice after her daughter came out. Her child or her church.