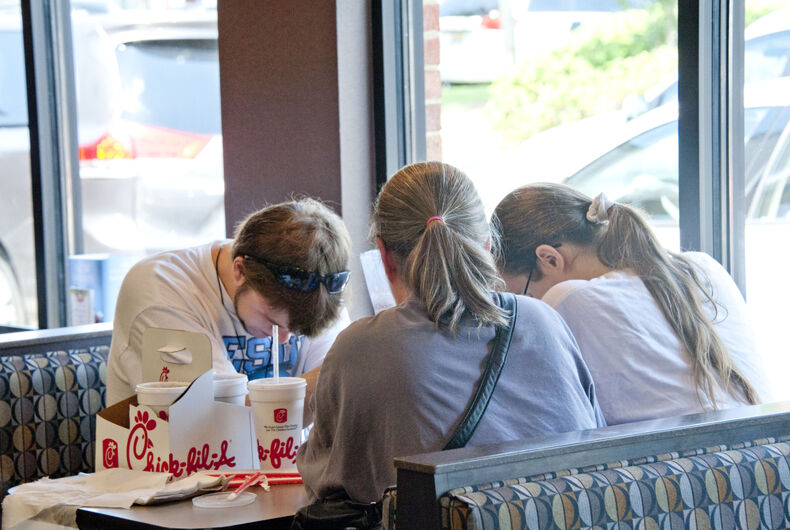 Texas Governor Greg Abbott wanted to make sure voters knew he was super duper unfriendly to the LGBTQ community and he’s signed a new law to prove it.

The “Save Chick-fil-A bill,” while gussied up in “religious freedom” language is actually blowback after San Antonio refused to allow the fast food chain to open a location in the local airport because of their anti-LGBTQ history.

Both LGBTQ activists and conservative Christians both think the bill will give businesses a license to discriminate. But despite efforts to kill the bill by the legislature’s newly formed LGBTQ Caucus, it still passed both legislative chambers.

Shortly after it passed, Abbott issued this obnoxious tweet:

Related: This Republican wants a law because “I don’t think you should be able to argue” with Chick-fil-A

So. What are the odds I’ll sign the Chick-fil-A bill?

I’ll let you know after dinner.

Yesterday, Abbott signed the bill into law. It’ll go into effect on September 1, 2019.

The “Save Chick-fil-A bill” is preposterous because as the #3 fast-food chain in America, Chick-fil-A hardly needs “saving.” But it could also blow up in conservatives’ faces.

In March 2019, 1,400 organizations with the pro-LGBTQ business coalition Texas Competes — including dozens of Fortune 500 companies like Amazon, Google and Facebook — warned the Texas legislature not to pass discriminatory state laws. They cited North Carolina’s transphobic 2017 bathroom bill as a warning — North Carolina lost more than $3.76 billion in revenue from companies boycotting the state after passing the law.

So far Texas Competes hasn’t issued any public statement on the newly signed law, but LGBTQ Nation has reached out to the group for comment.

The bill will do nothing to help Chick fil-A’s ongoing reputation as the world’s most bigoted fast-food chain in existence.

The company has a nearly decade long history of giving to anti-LGBTQ religious organizations. Last year, the company donated over $1.8 million to such organizations, including the Fellowship of Christian Athletes whose “sexual purity” guidelines forbid student members from “homosexual acts.” When asked about the donations, the company said it gave to these groups as part of “a higher calling.”