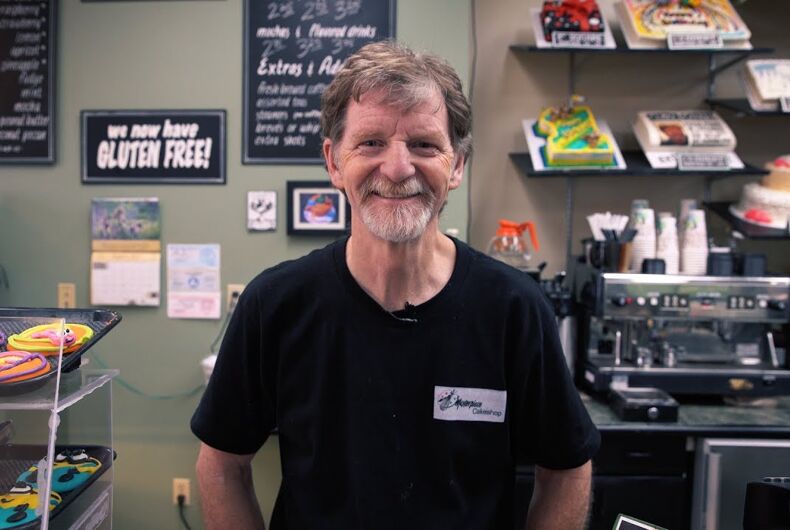 Jack Phillips, the anti-gay owner of Colorado‘s Masterpiece Cakeshop, is being sued yet again for his refusal to bake a cake for a member of the LGBTQ community. But this time it isn’t a gay wedding cake he has refused to bake — it’s a cake celebrating someone’s gender transition.

The story behind this latest lawsuit has a little slightly complicated legal history, but it all starts in June 2017 when Colorado lawyer Autumn Scardina called the Masterpiece Cakeshop asking for a birthday cake to celebrate her “tran-iversary” (the day she came out as trans).

Scardina requested a pink cake with blue frosting and explained the reason for the cake. The bakery refused, stating that they don’t make cakes for “sex changes.”

This shouldn’t have been too surprising seeing as Phillips’ bakery had been in the news for refusing to bake a same-sex wedding cake in 2012 because he felt it violated his religious beliefs against homosexuality. In 2015, the Colorado Civil Rights Commission (CCRC) told Phillips that state law prohibits businesses open to the public from discriminating against customers on the basis of race, religion, gender or sexual orientation.

So the CCRC told Phillips to start baking gay wedding cakes, re-train his staff and provide proof that they were operating in accordance with state anti-discrimination law. Instead, Phillips decided to stop selling wedding cakes altogether and sued the CCRC for violating Phillips’ constitutionally protected freedom of religion. By June 2017, his nationally known case was headed to the U.S. Supreme Court.

Although the U.S. Supreme Court eventually overruled the CCRC’s ruling because the commission’s comments during his hearing showed evidence of anti-religious bias (and thus, an unfair hearing), the Supreme Court didn’t rule whether religious business owners can refuse service to LGBTQ people.

For a while, it looked like Scardina’s case might finally press the issue. She complained to the CCRC and by August 2018, both CCRC and Phillips were suing each other over her tran-iversary cake. However, by March 2019, the CCRC and Phillips dropped their lawsuits believing that Scardina’s case wasn’t the best one by which to resolve questions over the bakery’s anti-LGBTQ practices.

The CCRC told Scardina she could pursue her own lawsuit if she wanted, so she did. She is now being represented by attorneys Paula Greisen and John McHugh.

In her lawsuit, Scardina says Phillips refused to sell her a birthday cake “because she is transgender, despite repeatedly advertising that they would sell birthday cakes to the general public, including LGBT individuals.”

Griesen told the media, “The dignity of all citizens in our state needs to be honored. Masterpiece Cakeshop said before the Supreme Court they would serve any baked good to members of the LGBTQ community. It was just the religious significance of it being a wedding cake. We don’t believe they’ve been honest with the public.”

The lawsuit says, the bakery’s “continued discrimination against the LGBT community in violation of Colorado’s Anti-Discrimination Act and the Colorado Consumer Protection Act.”