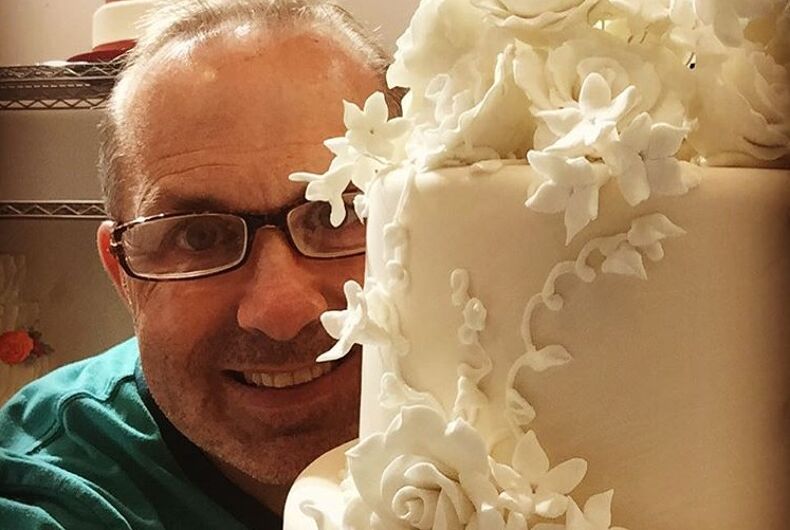 A famous cake designer is offering a wedding cake to a lesbian couple that was turned away from a bakery.

Last week, Brandi Ray and Michele Schmidt made national headlines when they tried to order a wedding cake at Susie’s Sweets in Tennessee but were turned away.

Susie Dennison, who owns Susie’s Sweets, had originally agreed to bake them a cake. When she realized that they were a same-sex couple, though, she texted Ray.

“I really enjoyed our time together and I truly wish you the best but after realizing that your union will be of the same sex, I cannot with my spiritual conviction and beliefs, do your cake,” wrote Dennison.

Jay Qualls, who designs cakes in Nashville, said that the story left him “enraged.”

“It’s different if they are a bad citizen or a bad customer,” he told The Tennesseean. “This has to stop. It’s discriminatory.”

Qualls has been working in the cake business for almost 30 years. He has worked with Martha Stewart and appeared on TLC’s Cake Boss and The Next Great Baker.

He knows what it’s like to face discrimination when planning a wedding. Two years ago, when he was marrying his husband, he planned to use Montgomery Bell State Park’s Cumberland Presbyterian Church.

When he went to pay, he was turned away because he was marrying a man. He didn’t go public with the story, though, to avoid media attention.

He said that Ray and Schmidt can have “anything they want” for their wedding cake.

“When you are serving the public, you have to be willing to serve all the public,” Qualls said.

Roseanne Barr targets #MeToo victims: ‘I know a ho when I see one’