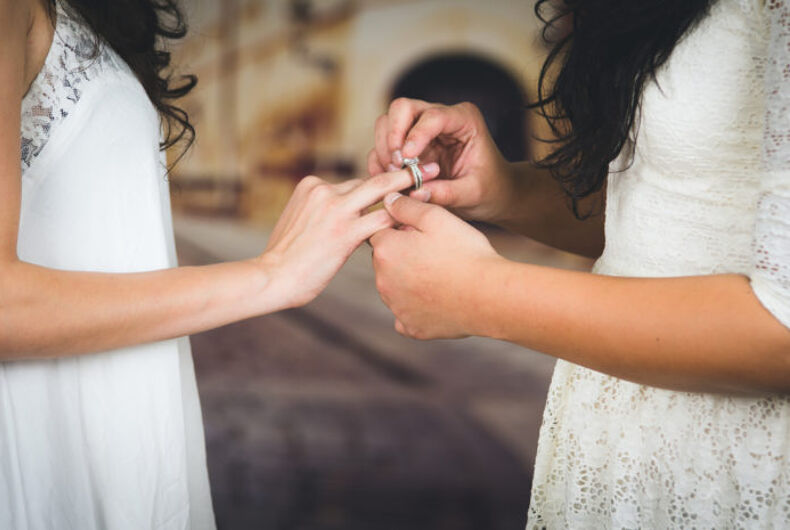 In a story that echoes the 2012 Masterpiece Cakeshop case, a lesbian bride was turned down for a wedding cake by a Tennessee baker over the “spiritual conviction” of the bakery’s owner.

Brandi Ray, who is engaged to Michele Schmidt in Dickson County, Tennessee, went to Susie’s Sweets for a tasting in advance of booking the baker.

After Ray left, she received a text from the bakery’s owner, Susie Dennison.

“I really enjoyed our time together and I truly wish you the best but after realizing that your union will be of the same sex, I cannot with my spiritual conviction and beliefs, do your cake,” said Dennison.

“I want you to know in saying that, I do love you in The Lord!”

“Had I known before you left, I would have said something then,” Dennison added.

Paul Dennison, the husband of the bakery’s owner, confirmed the text message, saying that it wasn’t until after Ray left that he read the name of the groom on Ray’s paperwork and realized the couple was lesbian.

This incident is similar to that of David Mullins and Charlie Craig’s attempt to get a wedding cake made by Masterpiece Cakeshop in Colorado during 2012. The owner of that bakery, Jack Phillips, declined to serve the couple over his religious beliefs against same-sex marriage.

Afterward, the couple filed a complaint with the Colorado Civil Rights Commission, as a violation of Colorado’s public accommodations law. While the couple won their case, and won on appeal in Colorado, they lost when the case ended up at the Supreme Court.

The opinions, however, was specific only to this incident, leaving open the possibility of a future federal judgement on the issue of religious freedom and baked goods at some future time.

A mob was attacking a trans woman. Then they turned on the police.