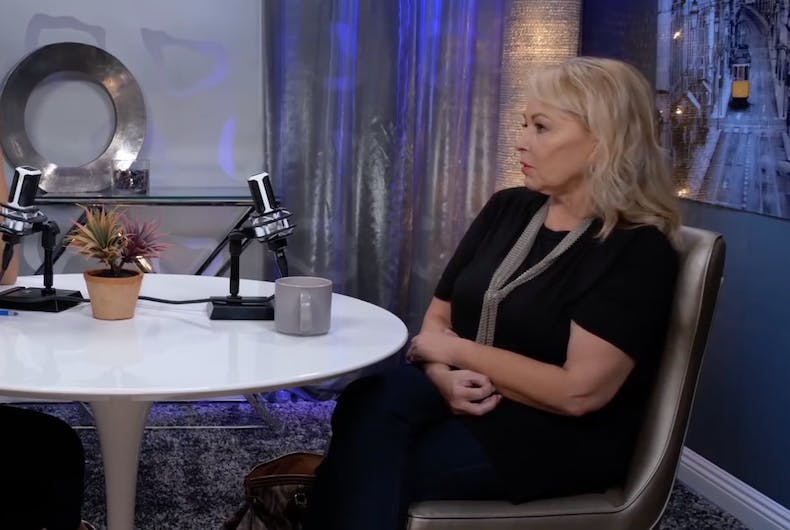 Rightwing nincompoop and has-been actress Roseanne Barr is at it again. This time, instead of having a racist meltdown on Twitter, the target of her ire are sexual assault victims. Barr’s popular reboot of her 90s sitcom, Roseanne, was promptly canceled after her social media tirade and the subsequent fallout.

Barr, a rabid Trump supporter who fled to Israel after the controversy, just can’t keep her yap shut and dumb keep falling out.

This time, she’s denigrating women who shared stories of sexual assault and abuse as part of the #MeToo campaign.

In an interview with conservative commentator and director of communications for Turning Point USA, Candace Owens, Barr questioned why actresses were going to hotel rooms “late at night” to meet producers. She also managed to snidely quip that feminism is modern day form of white supremacy.

“If you don’t run out the room,” she said, “but you stayed around because you’re like, ‘I thought maybe he was going to give me a writing job,’ well, you ain’t nothing but a ho.”

Barr claimed #MeToo accusers are “pretending that they didn’t go to trade sexual favors for money.”

“I know a ho when I see one,” Barr said. “They need to be called out. That’s privilege, too – ho privilege.”

“She should be in prison,” Barr said.

Owens, a black woman who shills for conservatives, made news herself over the weekend, when she told CPAC attendees that because she has “never been a slave in this country,” racism is over. Last month she defended Adolph Hitler, saying he wasn’t a “nationalist” like Trump, he was a “globalist.”

“If Hitler just wanted to make Germany great and have things run well, okay, fine. The problem is that he wanted, he had dreams outside of Germany. He wanted to globalize,” she said at the time.