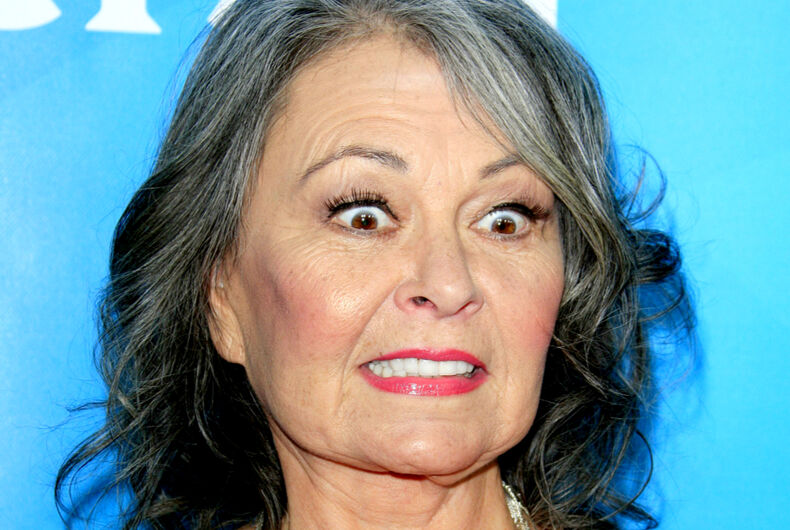 Roseanne Barr, who has made her support for Donald Trump well-known over the past few months, sent out several bizarre tweets this morning.

After some criticism, she announced that she was quitting Twitter.

The tweets, which have already been deleted, attacked Chelsea Clinton for supposedly marrying the nephew of George Soros, who is a frequent target of rightwing conspiracy theories.

Clinton is not married to anyone in Soros’s family.

Soros is a billionaire and a survivor of Nazi-occupied Hungary. Because he’s Jewish and donates money to progressive causes, the right has portrayed him as the Democratic Party’s behind-the-scenes puppet-master for decades.

“soros’ goal; the overthrow of us constitutional republic by buying/backing candidates 4 local district attorney races who will ignore US law & favor ‘feelings’ instead-and call everyone who is alarmed by that ‘racist,'” Roseanne tweeted.

“as soon as americans unite against disinfo mkultra classist narrative, the better we will all b,” she wrote in another tweet. She was referring to Project MKUltra, a CIA program in the 1960’s that used human subjects in experiments on mind control. The project was halted in 1973.

Roseanne also called Hillary Clinton “a colostomy jug cuz full of shite” and said that Valerie Jarrett – a senior advisor in the Obama Administration – is what happens if the “muslim brotherhood & planet of the apes had a baby.”

Jarrett is African American and was born in Iran while her father, who was a doctor, was running a hospital for children there. She is not Muslim and both of her parents were born in the U.S.

Because Jarrett speaks Persian, is an African American woman, and held a prestigious position in the Obama Administration, she has been the subject of conspiracy theories for years.

This morning Roseanne apologized for saying that Chelsea Clinton was married to George Soros’s nephew after she was corrected on Twitter.

She then responded to criticism of her tweet about Valerie Jarrett – which included bringing up Planet of the Apes to describe an African American woman – by saying it wasn’t racist because “ISLAM is not a RACE, lefties.”

ISLAM is not a RACE, lefties. Islam includes EVERY RACE of people.

She later apologized for her “joke” about Jarrett.

Is Pope Francis pro-LGBTQ or not? The Church doesn’t know either.