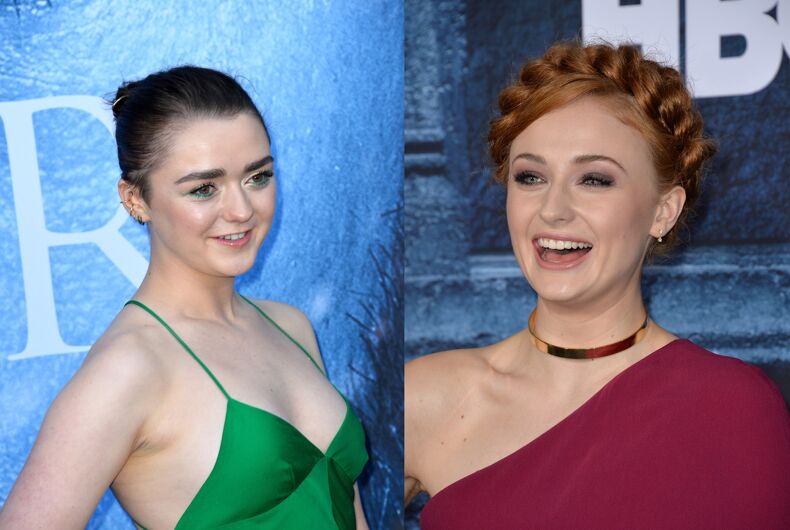 Actresses Maisie Williams and Sophie Turner, who play sisters Arya and Sansa Stark in Game of Thrones, talked about how they’re so close that people mistake them for a couple.

“Maisie is definitely my protector and I’m hers, too,” Turner told Glamour.

“I know if anything happened – especially if it was on Game Of Thrones, which it never, ever would – she’d go crazy and protect me… Maisie is my strong home.”

Williams said that Turner “knows too much about” her.

“I can’t tell you the amount of times Sophie said, ‘Go to therapy’ before I actually did,” she said.

Related: Watch this male artist’s transformation into the women of Game Of Thrones

Turner talked about how they’re so close that people think that they’re a couple.

“People always think Maisie and I are a couple. I mean, I am obsessed with her, so you never know.”

“Even though we are sisters [in the show], we tried to sneak a kiss into every scene we did together to freak everyone out a bit. It kept them on their toes, making sure they were following the script.”

She didn’t really explain how kissing each other made sure that other people were following the script, but some people just need an excuse for physical intimacy.

Williams has said that she rejects labels on her sexuality and that she is attracted to “personalities” not “genders.”

Turner is engaged to Joe Jonas.

Roseanne Barr targets #MeToo victims: ‘I know a ho when I see one’