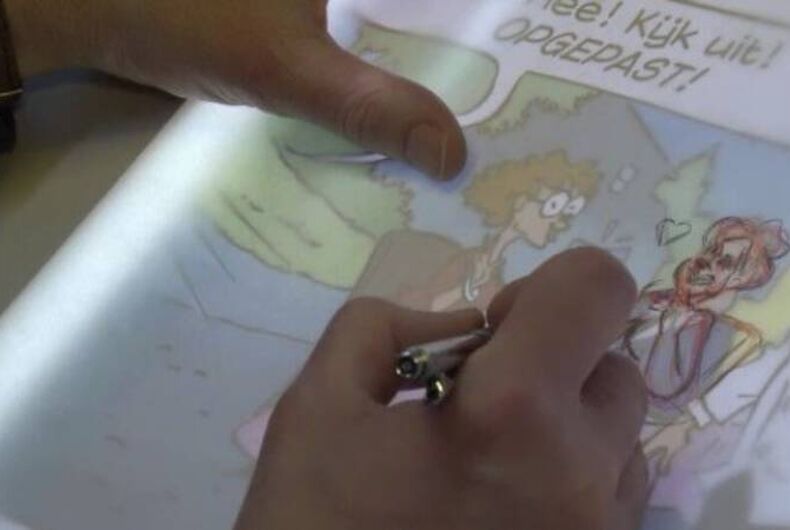 Animators changed a straight couple to lesbians in the latest Donald Duck comic after a 10-year-old girl requested more characters who resemble her parents.Photo: Screenshot

After 10-year-old Fenna made a plea for the inclusion of LGBTQ people in Donald Duck comics, the editor made a quick decision to honor the request. A lesbian couple – complete with hearts to show they’re a couple – will appear in the next edition.

Fenna was a guest on a popular children’s news program in the Netherlands when she brought up the lack of LGBTQ characters in her favorite comic. Fenna has two moms and two dads.

“There are no gays or lesbians in Donald Duck. I’ve checked them all,” she cutely told the presenter. “My parents are gay and lesbian and I think it’s important that that’s just as normal. But in Duck City it’s as if they don’t exist at all.”

Fenna wasn’t asking for a major storyline change. She doesn’t want the company to change Goofy’s sexuality, she just wants the comic to depict some real-life settings.

“Just the characters in the background,” she said. “You see lots of couples, a few of those extras could be gay.”

Editor-in-chief Joan Lommen told Fenna that gay and lesbian couples haven’t appeared in the comic because, “It’s not in the ears of the artists.”

Lommen agreed – and let Fenna in on a secret. The next edition will include a lesbian couple in love. Originally they were drawn as a straight couple, but Lommen had illustrators redo the drawing before it published.