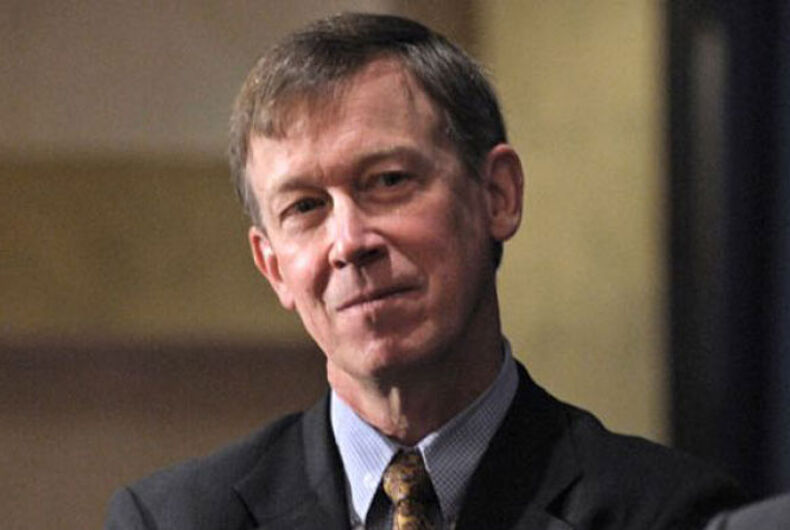 Hickenlooper won his first term as governor of Colorado in 2010 and he did not seek reelection last year because he was term-limited.

He has a strong record on LGBTQ rights as a purple state governor. When he took office, the state already had anti-discrimination legislation and hate crimes legislation that included sexual orientation and gender identity.

He was named as a defendant when Masterpiece Cakeshop owner Jack Phillips sued the state of Colorado for the right to discriminate against LGBTQ people.

“If you’re making someone a cake or you’re making a bicycle, it’s something that you do every day for a broad cross-section of people and it’s open to the public, I don’t think there should be bias involved in who you choose to serve and who you don’t,” Hickenlooper said in response.

In 2013 he signed a law that created civil unions for same-sex couples. In 2014 he announced his support for marriage equality, the same year that the state supreme court ruled in favor of LGBTQ people seeking marriage licenses.

“If all people are created equal, then by extension of law, logic, and love, every adult couple should also have the freedom to join in marriage,” he said in a statement at the time.

Hickenlooper, a straight white man running as a Democrat, is setting himself apart in the field by saying that he’ll fight Donald Trump.

He said he was “a skinny kid with Coke-bottle glasses and a funny last name.”

“I’ve stood up to my fair share of bullies.”

While he has a decent record on LGBTQ rights as Colorado’s governor, his campaign will focus more on health care and gun control.

A 2013 bill he signed expanded background checks on firearm sales and limited gun magazines, a coup in a rural state like Colorado.

Evangelicals are starting to abandon their churches because of Trump