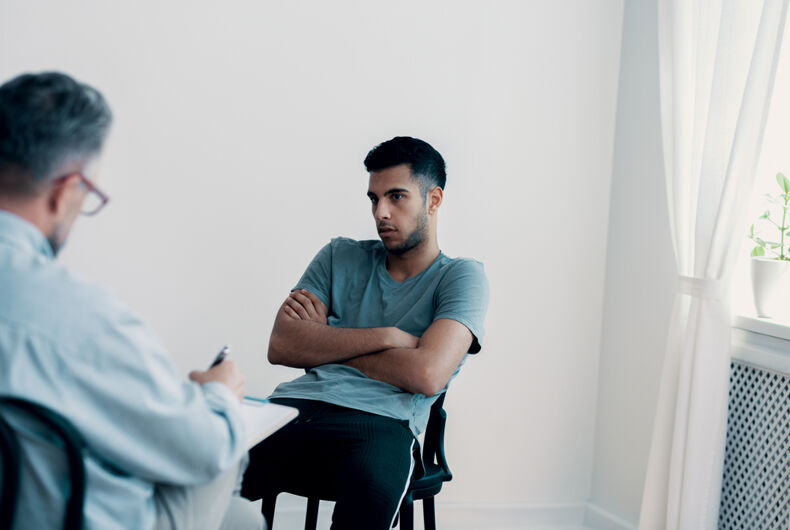 Alliance Defending Freedom, the anti-LGBTQ group that defended Christian baker Jack Phillips before the Supreme Court, is challenging New York City’s ban on anti-gay conversion therapy. ADF’s suit was brought on behalf of Dr. David Schwartz, an Orthodox Jewish psychotherapist who believes the ban prevents him from providing counseling to his patients.

In a complaint filed to the U.S. District Court for the Eastern District of New York on Jan. 23, Schwartz claims that patients regularly “[seek] his assistance in pursuing their personal goal of reducing their same-sex attractions and developing their sense of sexual attraction to the opposite sex.”

While the Brooklyn-based practitioner says he does not offer shock treatment, Schwartz believes New York City’s ordinance will prevent him from providing what is known as “talk therapy.”

“Dr. Schwartz simply listens to what his patients share with him, and talks to them,” the ADF states.

“Over the years, Dr. Schwartz has worked with a number of motivated patients who have experienced meaningful success in achieving their self-identified goal of reducing unwanted same-sex attraction and developing or increasing opposite-sex attraction, enabling them to live more successfully and happily the lives that they desire,” the complaint adds.

By preventing him from offering counseling to patients, the ADF claims New York City’s conversion therapy ban amounts to “censorship.”

“It is difficult to imagine a more direct violation of freedom of speech protected by the First Amendment than New York City’s attempt to regulate the private sessions between an adult and his counselor,” Brooks added.

The suit is cannily timed: Two years after New York City banned conversion therapy in a near-unanimous vote of its city council, the Empire State became the 15th in the U.S. to ban the practice at the statewide level.

Another long-delayed piece of pro-LGBTQ legislation was signed the same day: GENDA, which added gender identity to New York’s list of protected classes in employment and housing. It had been blocked for more than a decade.

Upon signing the bills, Cuomo claimed they “[sent] a clear and proud message that there is no place for hate in our state.”

However, the New York City bill actually goes farther than the conversion therapy bill approved by Albany on Jan. 25. While the New York state bill limits its scope to LGBTQ minors, the nation’s largest city municipality also bans orientation change efforts from being practiced on adults.

New York City is only one of two municipalities in the country to ban conversion therapy for individuals over the age of 18. Washington, D.C. Mayor Muriel Bowser signed legislation last month that bans conversion therapy for adults with disabilities under the care of a guardian. The new law is currently awaiting congressional review before it goes into effect.

While conversion therapy supporters claim these bans limit their First Amendment rights, LGBTQ advocates say they merely recognize what groups like the American Psychological Association and American Medical Association have said for years: “Praying the Gay Away” is dangerous and ineffective.

“Conversion therapy is a form of psychological torture, pure and simple,” said New York City Councilman Daniel Dromm when the ordinance passed in 2017.

Melissa Mark-Viverito, the former speaker of the New York City Council and chief sponsor of the ordinance, added that banning orientation change efforts would help “ensure all individuals will be able to live without fear of coercion to change into someone they are not.”

Despite the overwhelming medical consensus against orientation change efforts, the brewing battle in New York is just one of a number of pending legal challenges to conversion therapy bans.

Last year, Liberty Counsel filed a lawsuit against Tampa, Fla.’s conversion therapy ordinance on behalf of therapists David Pickup and Robert Vazzo. Pickup is not licensed to practice in Florida. Meanwhile, Vazzo has referred to homosexuality as “as a type of fetish where the object happens to be human” in interviews.

The plaintiffs unsuccessfully fought against California’s conversion therapy ban, but they have found greater luck in The Sunshine State.

On Wednesday, Magistrate Judge Amanda Arnold Sansone issued a preliminary injunction against Tampa’s ordinance. While Sansone did not take action against provisions banning electroshock therapy, medical practitioners will be permitted to offer talk therapy to patients as the case makes its way through the courts.

LGBTQ advocates, however, remain hopeful that history is on their side.

Sam Brinton is the founder of the “50 Bills, 50 States” movement, as well as a survivor of conversion therapy. The campaign has worked to introduce legislation banning the practice in every single U.S. state since California became the first to outlaw orientation change efforts in 2012.

With that kind of momentum, Brinton is “confident” the challenges to conversion therapy bans will “be resolved in favor of protecting LGBTQ youth.”

“As state after state and city after city pass these important protections, we anticipate that more and more LGBTQ youth will be protected from the dangerous and discredited work of conversion therapy and those who seek to promote its harms,” said Brinton, who also serves as head of advocacy and government affairs for The Trevor Project.

After an Austin gay-bashing, a newly formed ”Rainbow Patrol” stands up