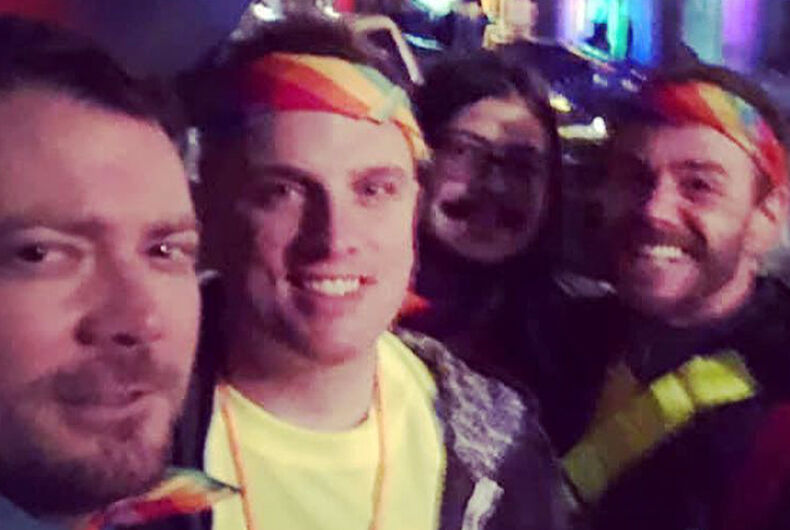 Spencer Deehring and Tristan Perry, a gay couple, were brutally attacked for holding hands after a night hitting the bars in Austin, Texas. The men were jumped by five assailants who left them with bruises and lacerations. Perry also suffered a broken nose and chipped teeth.

In the wake of this and other hate crimes in the city, a new neighborhood watch group has formed: the Rainbow Patrol.

“It sparked something very deep in me and very personal,” Collin Acock, the group’s founder, told KVUE-TV. “I got fed up, and I was like, ‘You know, it’s time to bring back the rainbow guard.'”

“What happened to those two guys is unacceptable not just in Austin, but anywhere period,” added James Huddleson, a friend of Acock’s who is also part of the Rainbow Patrol.

“We are a peaceful, inclusive and non-violent Patrol, if we can give anyone peace of mind to walk safely to their destination without fear is a plus! Let’s work together to bring back hope to all around! We need more people to join cause strength in numbers!”

Last week in Austin, a gay couple was walking home from the bar. Sadly they ended up getting beaten severely, because of…

The Rainbow Patrol currently has 22 volunteers, with 10 patrolling the area just last weekend. The group meets every Saturday from 11:00 p.m. to 3:00 a.m.. Those who are interested in being a part of the patrol can go to their sign-up form.

“We’re totally peaceful, not going to be carrying [weapons] in any way shape or form,” Acock said. “We have whistles. We have flashlights. We have reflective gear. We’re loud. We’re visibly loud.”

Related: Students hold a silent protest after a trans student was threatened with violence

Of course, the idea of a LGBTQ street-patrol within community spaces is nothing new. In the 1990s, an offshoot of Queer Nation, the Pink Panthers Patrol, was formed to combat violence in New York’s East and West Village neighborhoods. It was seen as an LGBTQ take on the NYC subway-patrolling Guardian Angels.

Such groups have also often been connected to other direction action groups, such as the Street Transvestite Action Revolutionaries (STAR). Founded in 1970 by Stonewall veterans Sylvia Rivera and Marsha P. Johnson, STAR helped provide housing for trans women and sex workers living on NYC’s streets.

From 2007 to 2011, “queer anarchist” groups across the U.S. collectively identified as Bash Back! They fought back against Nazis and conservative conformity with a potent mix of “gender mutiny, filth and glitter.”

The same could be said for The Check-It, a street gang of black queer and trans teens in Washington, DC, who are featured in the 2017 documentary Check It. Their gang was established in 2009 by a group of 9th graders as a way to protect and react to the violence they faced all around them.

Meanwhile, Austin police have no new updates on the January 19 attack. Spencer Deehring and Tristan Perry are still recovering from their injuries.

Editor’s Note: Article was updated to better reflect the aims of the Rainbow Patrol to clarify their non-violent stance and their founder’s trust in local law enforcement, as well as to correct the name of its founder.

Imprisoned, anti-LGBTQ Oklahoma senator has to pay $125,000 to the teen male prostitute he hired