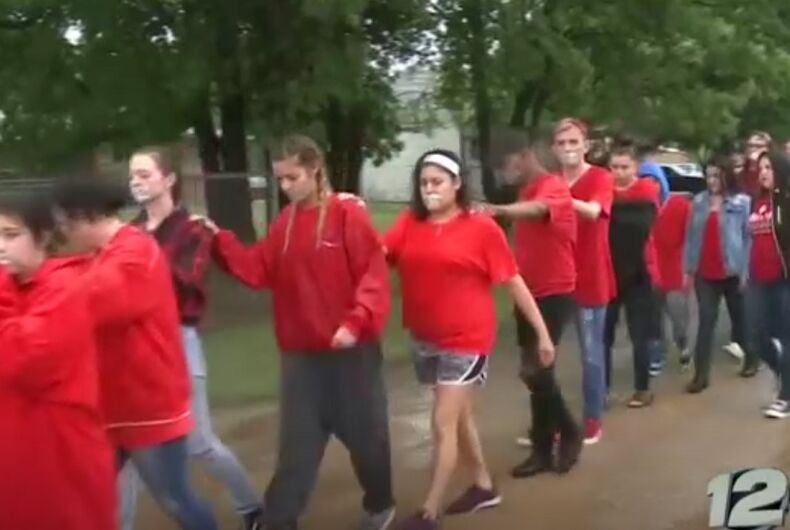 A demonstration was held for a seventh grade student who was threatened in Oklahoma because she’s transgender.

Comments made by parents in Achille, Oklahoma, on social media about 12-year-old Maddie drew national attention last week as they called for violence against the trans kid.

Achille Public Schools was closed on Monday and Tuesday while the Bryan County Sheriff’s Office investigated the threats against the trans kid.

The schools reopened on today, and a demonstration was held in the rain.

About 20 people showed up in the rural Oklahoma town to show support for Maddie. The demonstrators wore red to show their solidarity and duct taped their mouths to show how they want speak with their actions, not their words.

“Everybody is different. You don’t have to understand it or like it – just get along,” said Darius Douglas, who was at the demonstration.

Police had set up an area for counterprotestors – presumably people who would demonstrate in favor of violence against a seventh-grader – but none showed up.

The school district said that it was working with the FBI to see if the comments constitute a hate crime.

The online discussion started when one parent posted that Maddie had used the girls’ bathroom.

“She’s been living as female for years – she started at Achille as Maddie,” her mother Brandy Rose said. “We had no problems when we first started.”

Maddie usually uses a staff bathroom, but since it was one of her first days at the middle school, she didn’t know where the staff bathroom was.

“She hadn’t been told where the staff bathroom was,” Rose said. “Before she was able to be told, she had to pee, so she used the girls bathroom one single time.”

Rose has already filed for a protective order against one of the parents.

This gay couple was harassed by their neighbors for years. Then they were brutally attacked.