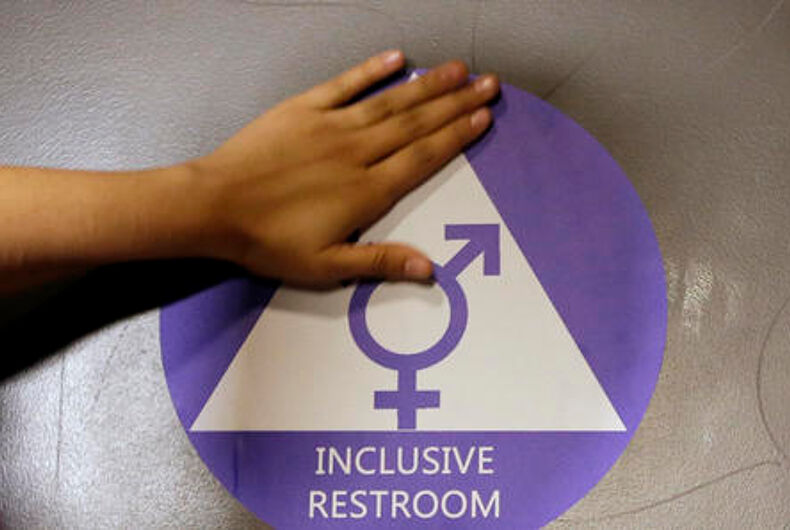 FILE - In this May 17, 2016 file photo, a new sticker is placed on the door at the ceremonial opening of a gender neutral bathroom at Nathan Hale High School in Seattle. Hundreds of parents across the country have called on President Donald Trump to embrace Obama-era protections for transgender students that call for letting them use school bathrooms in accordance with their gender identity. In a letter, sent to the president by the Human Rights Campaign late Tuesday, Feb. 14, 2017, more than 780 parents stressed that "all students deserve equal access to a safe, welcoming school and a high quality education no matter who they are." Photo: (AP Photo/Elaine Thompson, File)

In a series of Facebook messages gone viral, a parent group is threatening to cause bodily harm to a 12-year-old transgender girl near Achille, Oklahoma.

An emergency protective order has been filed in order to safeguard the child. At this time, her name has not been released publicly.

A series of screenshots captured by concerned citizens shows the conspiracy attempt being plotted to alienate, harass and discriminate against the girl and anyone else like her. They even show calls of action asking for other students to join in and assault the trans girl until she decides she’s too scared to return to school altogether.

Burney Crenshaw appears to be the ringleader in this anti-trans attack. The bullied student’s mother filed the restraining order on Friday, August 10. Crenshaw was formerly convicted of domestic abuse after pleading no contest in 2006. The charge was later dismissed following a deferred sentence.

Crenshaw’s wife, Jamie Ann Standifer Crenshaw, posted on the Achille ISD Parent Group Facebook page: “Heads up parents of 5th thru 7th grade girls. The transgender is already using the girls bathroom. We have been told how the school has gone above and beyond to make sure he has his own restroom yet he is still using the girls. REALLY….looks like it’s gonna be a long year. We have made school board meetings over this situation last year but nothing seems to be changing. This is the same kid that got an trouble as soon as he transferred two years ago for looking over the stalls in the girls bathroom. Enough is enough. – with Burney Crenshaw.”

I know other people are posting these as well but the original post got deleted. DO BETTER. THIS IS SICKENING

The Facebook responses were in line with the original intent to harm the child. Below are a few as previously published on Hate Trackers.

Eddie Belcher, age 79 of Broken Arrow, said, “If he wants to be a female make him a female. A good sharp knife will do the job really quick.”

Edward W. Belcher is a white supremacist supporter of the Confederacy.

Kevin Lee Bickerstaff, age 58 of Ada, suggested, “Just tell the kids to kick ass in the bathroom and it won’t want to come back!”

Bickerstaff is a bus driver for Frontier Airlines. He is married to Lajuan “Lou” Gayle Koehn Pachner Bickerstaff, age 46. Both Bickerstaffs have been sued in civil court for non-payment of debts and are involved in the Mid-South Youth Rodeo Cowboys Association of Oklahoma.

Seth Cooper said, “Let Parker [son of Burney and Jaime Crenshaw] whip his ass until he quits coming to school.”

Waylon Lott responded, “I let the queer teacher get me worked up! This is even worse! Lol”

Cooper then replied, “Lmao, both cases are BS, neither one of them should be allowed near th[sic] school.”

According to the 2010 census, the town of Achille has a population of only 492.

Not all lesbians hate penis, but this group thinks they should