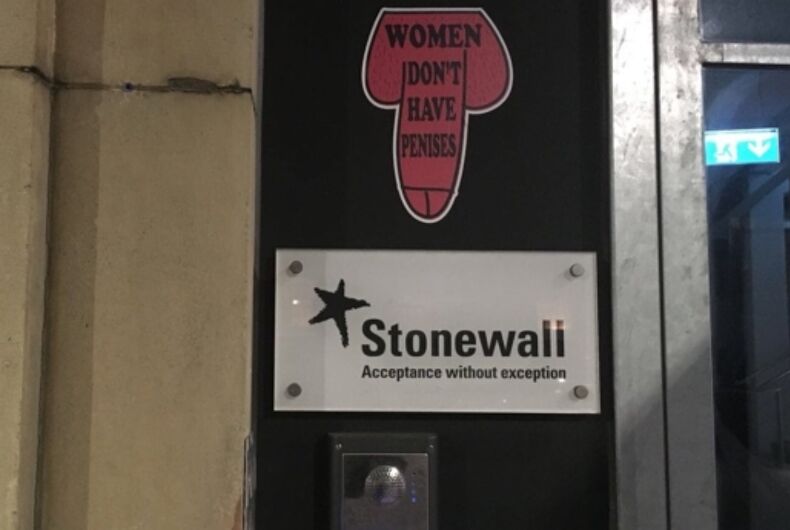 These anti-trans penis stickers are appearing all over London. Photo: Twitter / @sargesalute

A group of lesbians who have repeatedly shown public opposition to the government’s gender recognition laws say they are not responsible for penis stickers appearing all over London.

“This is comparable to teenagers trying to be funny and drawing penises everywhere – it’s incredibly immature, childish and just ridiculous,” said a non-binary trans activist who goes by the name Owl.

“I have yet to find another group of people than anti-trans bigots that are as obsessed with genitals as these people are,” Owl said. “It’s honestly really sad that they fall into these incredibly binary ways of obsessing over trans people’s bodies and enforce harmful stereotypes about gender, sex and bodies.”

The group is called Get The L Out. They were responsible for “hijacking the front of Pride in London’s parade in opposition to trans rights,” according to PinkNews (that hijacking was flipped on its head when a pro-trans group hit back at Brighton Pride in front of 300,000 attendees).

Guilty for anti-trans acts, such as penis stickers on public buildings all over town, or not, a simple search on Twitter for the hashtag #GetTheLOut produces these anti-trans results.

https://t.co/DQjoezDPyL "I so love this! #GetTheLOut said "It wasn't us, but… lesbians exist, are everywhere & are pissed off at the silencing & coercion the GBT has been enforcing upon us. We hope & encourage lesbians & women to carry out such actions everywhere.”

Angela C. Wild, a spokesperson for Get Out the L, wrote a scathing response to the PinkNews story referencing her group.

“Given the bad press your publication has spread about our action and the naming of Lesbians as a hate group I am not quite sure why I respond to you. However, these stickers are not a #GetTheLOut action,” she wrote.

Adding, “We do support their message as we believe in biological reality of the sexes, not in fairytales the gender ideology is enforcing on us.”

She then took it upon herself to speak for all the lesbians. Pretty much everywhere. Without permission.

“You will find that Lesbians exist, are everywhere and are pissed off of the silencing and coercion the GBT has been enforcing upon us,” she wrote. “We hope and encourage Lesbians and women to carry out such actions everywhere.”

Except, news flash: not all lesbians hate penis.

“This seems to be a desperate response to trans people and their allies putting up stickers and paste-ups around Brighton, and the continued support trans people are getting from LGBT organisations and Pride parades,” said Fox Fisher, a non-binary trans activist and filmmaker.

“We’re constantly being put into a reactionary position against bigots, and we never get to speak in the media without being in response or literally sitting across from someone who thinks we are self-hating lesbians that mutilated our bodies, perverts, abusers or a danger to children,” Fox added.

Still, Get The L Out is clear in their attempt to erase our trans brothers and sisters.

“We believe that lesbian rights are under attack by the trans movement and we encourage lesbians everywhere to leave the LGBT and form their own independent movement,” their website reads. “…as well as to be vocal and take action against the proposed changes to the GRA.”

They add, “The trans movement with the complicity of ‘queer’ LGBT politics is coercing lesbians to have sex with men. We firmly condemn this vicious form of lesbophobia disguised as progress.”

Trump watches old Hillary debates because he finds himself ‘brilliant’