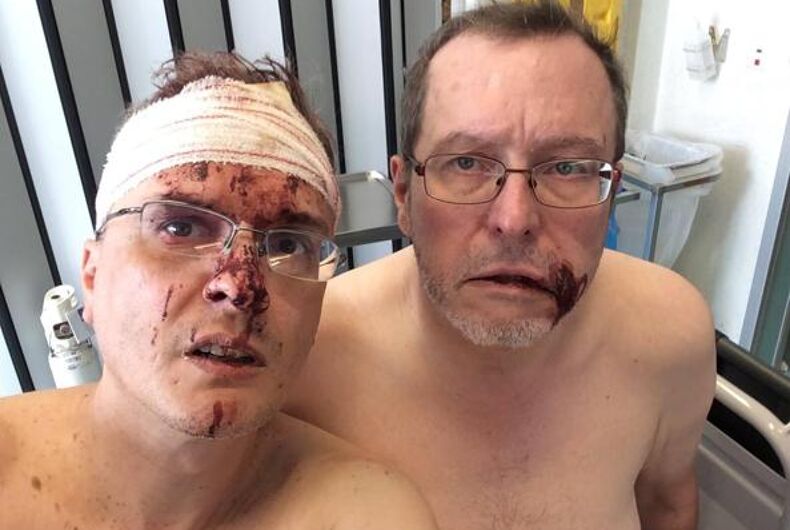 A gay couple in Belgium is coming forward to talk about the brutal beating they suffered in their neighborhood.

Mauro Padovani, 46, and his husband Tom Freeman, 59, say that they were attacked last Monday near their home in a town outside Ghent.

Mauro is Italian and Tom is American, but he was born in Belgium. They met 12 years ago and got married five years ago, and Mauro moved in with Tom in Belgium.

Mauro told Corriere that a young, straight Bulgarian/Croatian couple moved into their neighborhood four years ago. The first time the two couples met, the straight couple said, “We hate gays.”

The straight couple harassed Mauro and Tom, sometimes violently. They threw bricks and they screamed at them, according to Mauro. He said he reported them to police but he said that the police did nothing.

“It’s been four years that they have been making our life hell. Tom was punched in the face two years ago, I was attacked just two months ago,” Mauro told Genova Today.

“In another incident, the woman, who lives above us, threw two bricks from her terrace onto ours, missing me by very little.”

“The police never did anything,” he added.

Last Monday, on Tom’s birthday, things took a turn for the worse.

“We were going to a friend’s house to celebrate. We had just gotten into the car when our neighbor approached it and spat on the window,” Mauro said.

Tom got out and tried to calm the male neighbor, but the neighbor punched him in response. Mauro got out of the car with the steering wheel lock, “but the boy snatched it from my hands and started hitting us.”

Tom left the altercation with two crushed vertebrae, and Mauro got a concussion.

Mauro said that he’s especially hurt by what happened since Tom has Alzheimer’s disease.

“It’s the thing that hurt me most,” he said. “To see him on the ground in tears. To beat a person like him is like beating a child.”

Mauro shared images of the injuries they suffered on Facebook to raise awareness about violence.

“I hope that no gay person, either here in Belgium or in Italy, should ever suffer a brutal assault like the one we have suffered,” he said.

Police arrested the straight couple. The woman has been ordered to stay away from them, and the man is being held in custody on charges of assault with a hate crimes enhancement. He is awaiting trial.

This past Friday, residents of Ghent organized a demonstration against anti-gay violence in support of the couple.