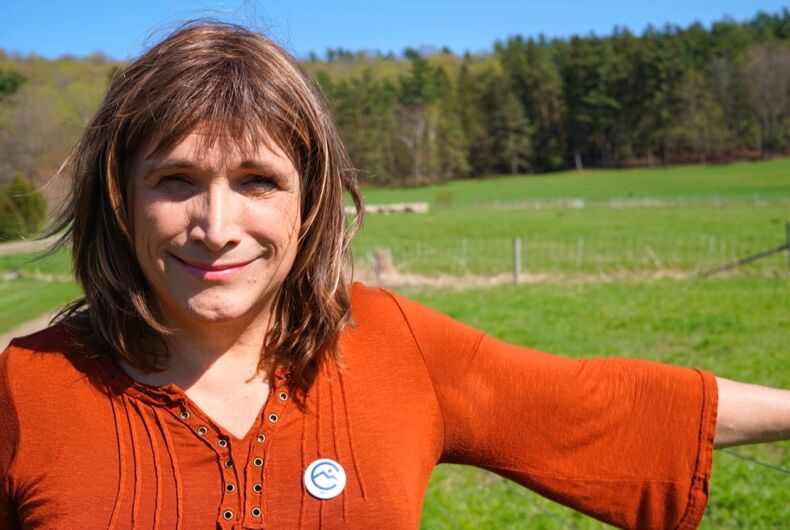 Christine Hallquist is a former energy executive who has stepped out from behind the CEO desk to step into the Vermont governor’s race. She’s married, and a parent.

She’s a long-time Democrat running to defeat a Republican in a state where they haven’t unseated a first term incumbent Governor since 1963.

She’s also a transgender woman who, if successful, will be the first trans person to serve as a governor of an American state.

We had a chance to sit down with Ms. Hallquist and while she recognizes the historical importance of her run — and the challenges she faces — she remains focused on issues dear to her and others in her state.

LGBTQ Nation: You are fairly new to politics overall. What motivated you to run for Governor?

Christine Hallquist: I’m going to have to go back to 2008. In 2007 and 2008, I canvassed hard for Barack Obama, and went over to New Hampshire, knocking on doors. Got a personalized invitation to the Inauguration — of course there were 500,000 of them, but still our personal invitation.

My wife and I went down with my son and his wife, and that was an epic moment. It felt to me like America had reached this pinnacle in terms of our aspirations to achieve justice for all. I was pretty comfortable politically, and focused on climate change.

Then November 8th of 2016 happened, and I went into political depression. January 20th 2017, I went down and marched with 650,000 others in Washington (D.C.), and of course I was very energized at the end of that day. That was the Women’s March.

I went back to Vermont, and things continued to get worse. A few months later I marched with the climate change march with a couple hundred thousand folks. Felt somewhat energized.

Came back to Vermont and things continued to get worse — but on January 20th of this year, 2018, I was in Montpelier, which is the state capitol, and I listened to these four young women.

They were high school seniors, and they called themselves Muslim Girls Making Change, and they did slam poetry on what it’s like to be Muslim in Vermont. I cried because I realized that all through 2017 I was in this kind of bubble, thinking Vermont would be insulated from what was happening nationally, and it was clear we were not.

I took a look at our Republican governor, and saw that he was practicing the same politics as the national party in terms of focusing on division and fear. That’s when I decided to run.

QN: How have you navigated those who would seek to attack you for being a trans woman running for a political seat, rather than on issues?

CH: I waited until I was 59 to transition. This is not the hardest thing I’ve ever done. I certainly expected a lot of that in the campaign, so I was not surprised. I ignore it. It’s pretty straightforward.

Things in the past week have escalated, certainly, because of the national coverage, and even international coverage. But I’ll put it this way. Being in Vermont, I know I wouldn’t have gotten their votes anyway, being a Democrat so… no, there’s nothing I’d want to say to them. I think it would be the worst thing I could do is to try and engage.

QN: Do you feel that being trans has had an impact on this race?

In 2007, Vermont passed some of the most supportive transgender laws in the country, and in 2011, Vermont mandated that healthcare include trans health. We have a lot of history in support of civil rights.

Vermont has pretty much welcomed me with open arms, as far as civil rights.

QN: You are one of a growing number of transgender people seeking office. Do you have any thoughts on what is fueling this movement?

CH: I would expand that to all kinds of people this year running for office that normally would not have run.

I was speaking to Emily’s List a couple weeks ago, and they mentioned that in 2016, 900 women had indicated that they were interested in running for office. This year it was 43,000.

So for me this is very logical. In the world of physics we say that for every action there’s an opposing reaction, and I think this is a logical reaction to what happened in 2016.

I’m hopeful that our children, and our children’s’ children are going to look back and say, “2018 is the year we changed history in this county,” and I’m hoping we can say, “our democracy was so healthy that we even survived a despot.”

QN: What do you see as some of your biggest challenges in this election?

CH: We’ve already seen a lot of national vitriol in the last week or so, and of course some death threats. I assume that’s going to get worse.

Any time you have a major shift in culture, there are going to be people who are going to try to hold onto that old culture. In our country, we have a lot of violence, so I anticipate problems. The better we do, the more problems I expect.

QN: What issues are dear to your heart? That is, what do you intend to champion from the Governor’s chair?

So 95% of Vermonters are concerned, saying “Am I going to have a job? Can my children work here?” As our rural stores close, people have to drive a long way to shop. It really is about the need to change the direction of our rural economy.

With that, I will connect every home and business with fiber optic cable so that Vermonters can be connected to the Internet at the same speeds as the big cities.  We can change the economy, but we have to be connected to have a business today.

I would also move towards improving Medicare for all, and I would form a union with other states to do that. I would accelerate the work we’re doing on climate change.

I would also ensure that every child has a quality public education. The reason that’s important is that our Governor is attacking the public education system. Vermont is a beautiful place, and we have some of the best education in the Nation.

As part of the accelerated work we’ve been doing on climate change, I’ve participated over the past 2 1/2 years on a grant from the Department of Energy to really right the pathway to get to 90% renewable energy from all sources, including vehicles and heating and cooling by 2050.

I would make that part of the state’s comprehensive energy plan, and ask the legislature to pass a law that we get to 90%

My passion was to solve climate change. When I left we were 96% carbon free, we were offering incentives to people to get away from fossil fuels for heating, cooling, and transportation, and we did that without a rate increase for five years — which essentially proves you can solve climate change, and it does not need to cost more money.

Vermonters are going to vote for me based on what I’m going to do for Vermont. I recognize the national historical significance of what we’re doing here, at the same time, I’m staying focused on the issues here in Vermont.

We wish Ms. Hallquist much luck and success in her bid.

This gay couple was harassed by their neighbors for years. Then they were brutally attacked.