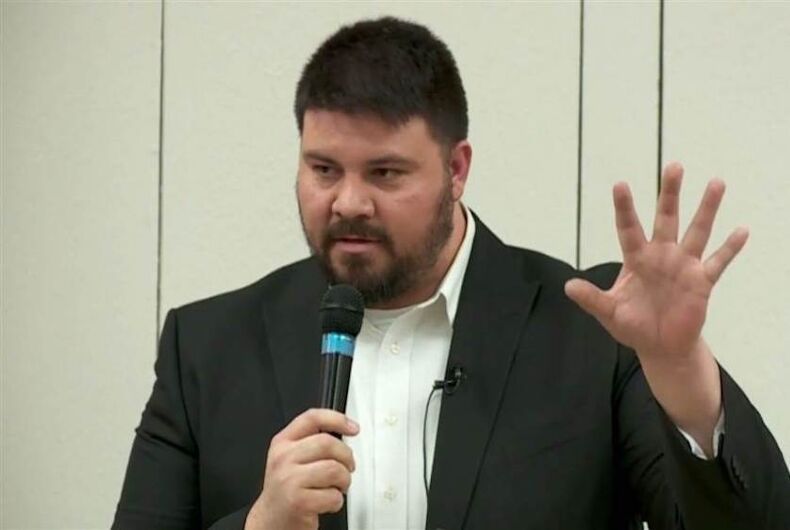 Remember Ralph Shortey? He’s the former Oklahoma State senator and Trump campaign chair who, despite having and supporting anti-LGBTQ legislation, was arrested in 2017 for hooking up and smoking weed with a 17-year-old male sex worker.

It turns out that in addition to serving 15 years in prison, Shortey has to pay over $125,000 in restitution to the teen boy he slept with. Though Oklahoma’s age of consent is 16, the state’s child sex work statute applies to any person under 18.

It’s unclear whether Shortey and the teen actually had sex, but they were found in a Motel 8 hotel room with lotion and condoms, so…. Video of Shortey’s arrest showed him wearing a shirt with a Bible verse about women submitting to their husbands, along with a drawing of a sandwich and the words, “now make me a sandwich.”

The restitution money is meant to pay for the young man’s psychological treatment for any trauma and victimization he experienced with Shortey. Since Shortey’s currently in the slammer earning very little money, he’ll have to pay back most of the money after he leaves prison and no, he can’t appeal.

This money is just the latest log tossed onto Shortey’s bonfire of well-deserved humiliation. Shortly after the then 35-year-old senator’s arrest, Senate workers scraped his name from his office door, changed the locks and painted over his name in the Senate parking lot. He also lost all most of his senatorial positions and perks. He resigned six days later.

He originally faced child pornography charges for receiving explicit images of the teen boy, but prosecutors later dropped those charges. His wife then divorced him in 2018. A judge later refused to let him spend time with his four home-schooled daughters, and his wife reportedly changed her and her daughters’ last names.

During his seven years in the state Senate, Shortey built a name for himself by pushing bills targeting those living in the country illegally and expanding gun rights. He routinely voted with his Republican colleagues on bills targeting gay and transgender people, including an approved measure allowing business owners to discriminate against gay people.

After an Austin gay-bashing, a newly formed ”Rainbow Patrol” stands up

USA Powerlifting has banned all trans women from its competitive events