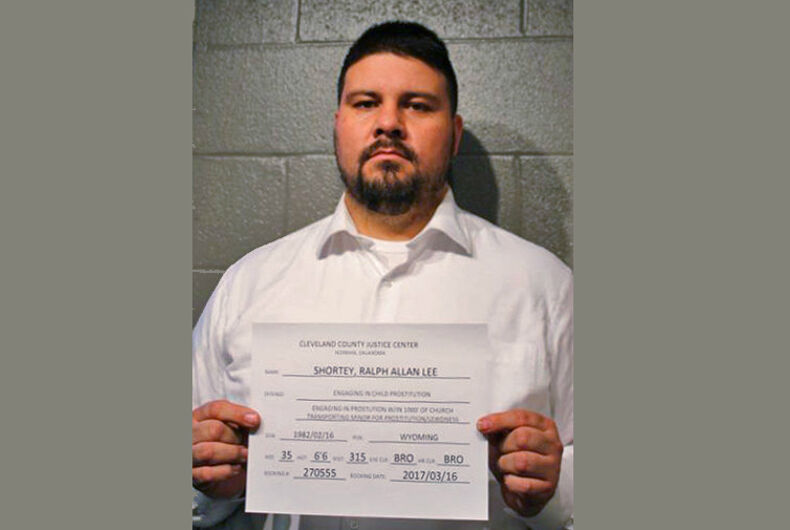 OKLAHOMA CITY (AP) — A two-term Oklahoma Republican state senator’s fall from political power following his arrest on child prostitution charges has been stunningly fast. Before state Sen. Ralph Shortey was even arrested or formally charged, Senate workers already had scraped his name from his office door, changed the locks and painted over his name in the parking lot.

A conservative Republican with a wife and three young daughters, Shortey surrendered to authorities on charges of engaging in child prostitution, transporting a minor for prostitution and engaging in prostitution within 1,000 feet of a church. He was released after about two hours on a $100,000 bond.

“I have no comment at this time, but I will soon,” he told reporters outside of the jail.

Court records didn’t show if he had retained an attorney, and Shortey didn’t reply to texts and voicemails seeking comment.

The allegations led to Shortey’s removal from his volunteer position with the Oklahoma City YMCA’s Youth and Government program, in which he has been active for 17 years and served as a chaperone on several out-of-state trips, YMCA spokeswoman Brenda Bennett said. She said she was unaware of any allegations of wrongdoing involving Shortey’s work for the program, but that the agency is conducting an internal investigation due to the nature of the criminal case.

Acting on a tip from the teen’s father, police went to the Super 8 Hotel in the Oklahoma City suburb of Moore last week to check on the boy, who was seen going into a room with a man, according to a police report. The officers were told the boy had solicited sex through Craigslist on other occasions and had a history of drug abuse.

The officers smelled marijuana smoke coming from the room and found Shortey and the teen alone inside.

A search of the teen’s tablet uncovered a series of sexually explicit exchanges in which Shortey referred to the teen as “baby boy” and offered him cash in exchange for “sexual stuff,” according to a police report. The conversation had started with the teen messaging Shortey that he needed “money for spring break,” police wrote. Officers also found lotion and an open box of condoms inside backpacks in the room.

Shortey and the teen both told the officers that they had known each other for about a year, having met through Craigslist and later communicating via the messenger application Kik, which has been criticized as being unsafe for minors.

The age of consent in Oklahoma is 16, but Oklahoma’s child prostitution statute applies to any person under 18 years old. It’s unclear from the police report or charging documents if Shortey and the teen actually had sex. But prosecutor Susan Caswell said her office wouldn’t have to prove they did.

“Soliciting refers to offering money in exchange for sex,” Caswell said. “You don’t have to perform the act.”

The state Senate imposed sanctions Wednesday on Shortey, voting 43-0 for a resolution that accused him of “disorderly behavior” and stripped him of much of his power and many perks.

If he doesn’t resign, Shortey, who was a county coordinator and early supporter of Donald Trump’s presidential campaign, could be expelled with a two-thirds vote, or 32 members in the 48-member body.

During his seven years in the state Senate, Shortey built a name for himself by pushing bills targeting those living in the country illegally and expanding gun rights. He routinely voted with his Republican colleagues on bills targeting gay and transgender people, including a measure passed earlier this year that would allow business owners to discriminate against gay people.

“He was never vitriolic about it, but he would make the bad votes,” said Troy Stevenson, director of Freedom Oklahoma, a gay rights advocacy group.

Shortey faced fierce public criticism earlier this year when he sponsored a bill to stiffen the penalties for drug possession within 1,000 feet of a school or church, even after Oklahoma voters in November voted to make such crimes misdemeanors.

Before his arrest, Shortey was perhaps best known for introducing a bill in 2012 that would have banned the use of aborted human fetuses in food — a measure that drew widespread ridicule and was never granted a hearing in a Senate committee.

© 2017, Associated Press, All Rights Reserved.
This material may not be published, broadcast, rewritten, or redistributed.
News (USA)
Oklahoma, Prostitution