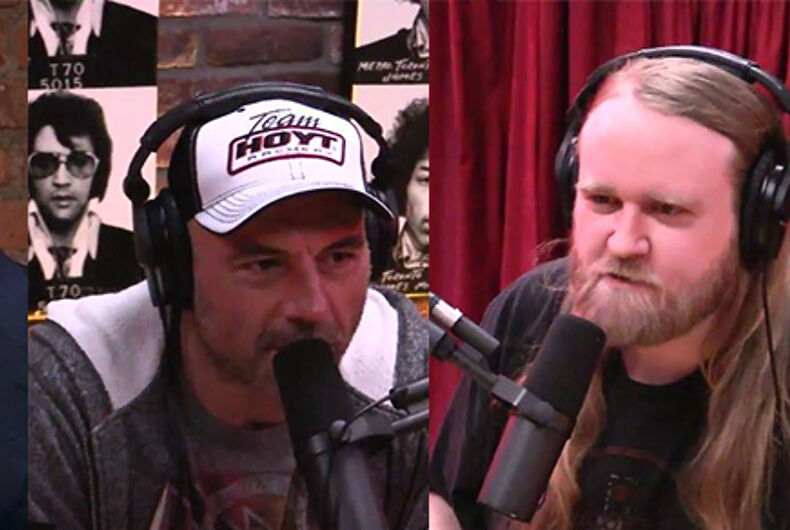 Podcasters Joe Rogan and TJ Kirk, also known as “The Amazing Atheist,” sat down together for an episode of The Joe Rogan Experience, where they discussed the fact that it was their podcasts that lead to the downfall of Milo Yiannopoulos.

Yiannopoulos lost his lucrative book deal with Simon & Schuster, had his speaking spot at CPAC pulled, and parted ways with Breitbart, where he served as a senior editor, due to comments he made on The Joe Rogan Experience and Kirk’s podcast Drunken Peasants about child sexual abuse, including his own, that seemed to many to trivialize it and support relationships between adult men and underage boys.

Related: The hero behind Milo Yiannopoulos’ fall is a 16-year-old girl from Canada

After a brief back and forth about the differences between smoking and eating marijuana, the two podcast hosts launched into the elephant in the room.

“Your podcast was the big podcast that kind of sunk Milo,” Rogan, who is also a comedian and UFC commentator, told Kirk. “It was kind of a combination of mine and yours.”

“And I remember it was me watching him on your show that lead us to ask about that, cause I saw him on your show and he was like God at the time,” Kirk recalled. He said he told his podcast co-host to make sure he knew what he was getting himself into if he confronted Yiannopoulos.

“I told Paul, one of my co-hosts, ‘This guy ain’t no lightweight and he’s got a huge army of sycophants right now. If you get in a debate with him: If you lose, you’re a total bitch; if you tie, you lose; if you win by a little, you lose. The only way you can actually beat him, with his army of sycophants at this time, is if you just demolish him. So don’t even try.'”

Rogan said he “kind of knew where (Yiannopoulos) was coming from.”

“I knew he had experiences, sexual experiences when he was younger, and I think he was trying to trivialize them, and turn them into humor,” Rogan said.

“His way of dealing with it or whatever, was to say, ‘It was mutual between me and the priest. I was molested by a priest but I was into it, so it was cool,” Kirk said.

“Yeah, like he seduced the priest,” said Kirk. “You know, it’s kind of hard for me to imagine a 13-year-old boy, no matter how flamboyantly gay or sexually aggressive, you know, jumping the priest’s bones or something.”

“I think it sort of gives you a better understanding of how this guy came to be who he is today, and why he so relishes this role of being the contrarian, and being this sort of very difficult to pigeonhole gay man, who’s very conservative but yet believes in man-boy love,” Rogan said.

Related: Will Milo Yiannopoulos get thrown out of the United States?

Kirk and Rogan questioned whether or not Yiannopoulos is faking his whole persona, with Kirk suggesting the story about the priest could be a lie.

Watch Rogan and Kirk discuss the series of events that brought Yiannopoulos down in the video below, starting at the 15 minute, 15 second mark.