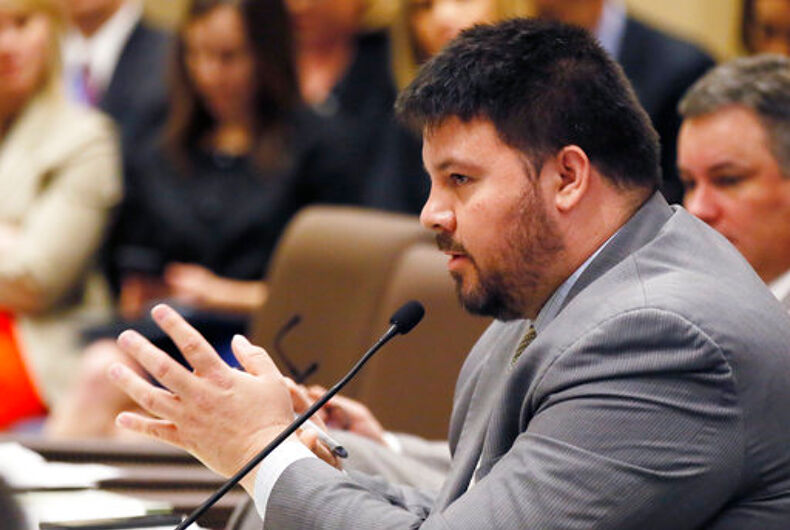 FILE - In this Feb. 22, 2017 file photo, Oklahoma state Sen. Ralph Shortey, R-Oklahoma City, speaks during a Senate committee meeting in Oklahoma City. The Oklahoma Senate has voted to punish Shortey, who police say was found with a teenage boy in a motel room. Police officials in the Oklahoma City suburb of Moore are still investigating the circumstances surrounding an incident last week involving Sen. Shortey and a teenager. No charges have been filed. Photo: AP Photo/Sue Ogrocki, File

When I first got interested in politics in 2004, I remember the conventional wisdom was that the United States was a center-right nation and that the Republican Party would always be in power. It only took a few years for that to turn around, for Democrats to start talking about how demographic trends meant that the Republicans wouldn’t be winning major elections any time soon.

How quaint that seems now.

In 2009, the Tea Party emerged when a rich dude got angry on CNBC about the prospect of people swindled by banks receiving any kind of relief from the government. The Tea Party’s first major cause was to oppose poor people getting access to health care, and mainstream news sources wanted us to believe that they were something other than the usual crowd of conservatives who feel triggered when they have to press 1 for English.

It was obvious at the time that this was just an attempt to re-brand the same people wanting the same things as always, but we were told that the “moral values” issues that were so important in 2004 were going to be put aside to focus on economic issues.

A story from this past week shows just how much things have not changed in the past couple decades. An Oklahoma state senator, Ralph Allen Shortey, was caught in a motel room with an underage boy, with a lot of evidence pointing to the fact that he wanted to pay the 17-year-old boy for sex.

Shortey has been married to a woman since 2002 and they have three kids. He’s a standard far-right conservative, with the associated authoritarian beliefs that he, like most wingnuts, likes to call “liberty.”

He also lives in the right-wing bubble, an alternate universe constructed by media sources that have no concern for the truth, not even the bare commitment to facts shown by mainstream media outlets. It’s only in this context that his 2012 bill to ban the use of fetuses in food preparation be understood.

“There are companies that are using embryonic stem cells to research and basically cause a chemical reaction to determine whether or not something tastes good or not,” Shortey told The Oklahoman. No evidence of this practice was found, to which Shortey responded, “They’re not going to admit to it because it’s a public-relations nightmare.”

Indeed! With that logic, we could accuse anyone of anything and then say that the lack of evidence proves the cover-up! Why, we could accuse Shortey of having sex with a teenage boy, because he would never admit to that!

This is the type of conservative I grew up with in suburban Indiana. They’re always under attack. The mainstream media refuses to talk about the important news, mainly because it didn’t happen. They talk like cranks and they listen to cranks and they’ll believe whatever they hear, as long as it’s an angry white dude (or an angry, skinny blond woman) shouting it.

And they live in such hatred of their own sexual urges that they think the government should control everyone’s sexuality.

I don’t know whether Shortey is a gay or bisexual man whose felt his only outlet for his sexuality was a with a teenager, or if he has a predilection for pederasty that would exist no matter how open about his sexuality he were. Maybe he just likes the power that he can only feel when paying a minor for sex.

I don’t know, but the political result is the same: he felt a need to hide his sexuality, which led to him imposing rules on other people’s sex lives. His warped view of sexual politics comes from his own experiences.

There is nothing new about this theme. In fact, it’s reminiscent of Ted Haggard‘s and Larry Craig‘s outings, two of the biggest stories in the queer news when I first started writing ten years ago.

But a scandal like Shortey (an early Trump supporter, to boot) is facing could have happened in any of the last five or six decades. The more things change, the more they stay the same.