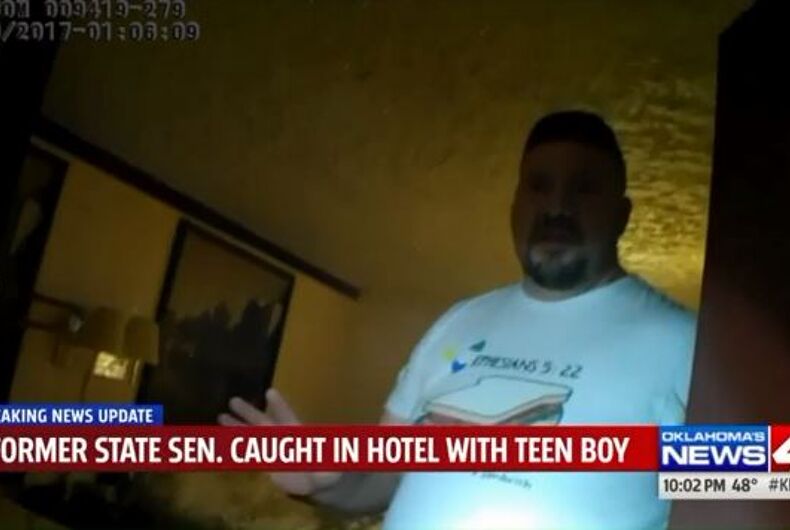 Police have released body cam footage from the night they arrested a “family values” Republican lawmaker they caught in a hotel room with a 17 year-old male prostitute.

Ralph Shortey was a state senator, and the Trump campaign chair for Oklahoma, before the arrest. He made a name for himself by putting forward conspiracy theory legislation like banning the human consumption of aborted fetuses. For the record, there is no evidence that this is taking place.

He was also no friend to the LGBTQ community, voting for a measure passed this year to allow businesses to discriminate.

Shortey, who can be seen eventually letting the police in, is wearing a shirt with a Bible verse about women submitting to their husbands, along with a drawing of a sandwich and the words, “now make me a sandwich.”

Officers can be heard discussing a strong smell of marijuana outside the room, and instruct those inside they are there to check on their welfare, and that they aren’t going away until they come out.

First the teen comes out, although that part is cut from the video. Then, after some delay, Shortey emerges, hands up.

“I’m sorry, guys, you’re kind of freaking me out a little bit,” he says.

“Whatever you’re doing,” another officer tells him later. “It’s a bad fucking idea.”

Shortey plead guilty to child sex trafficking charges and was denied a request to be released pending sentencing that he had made on the grounds that he needed to be home to help his wife home-school their children.

Minister encourages his flock to slaughter all gays by Christmas