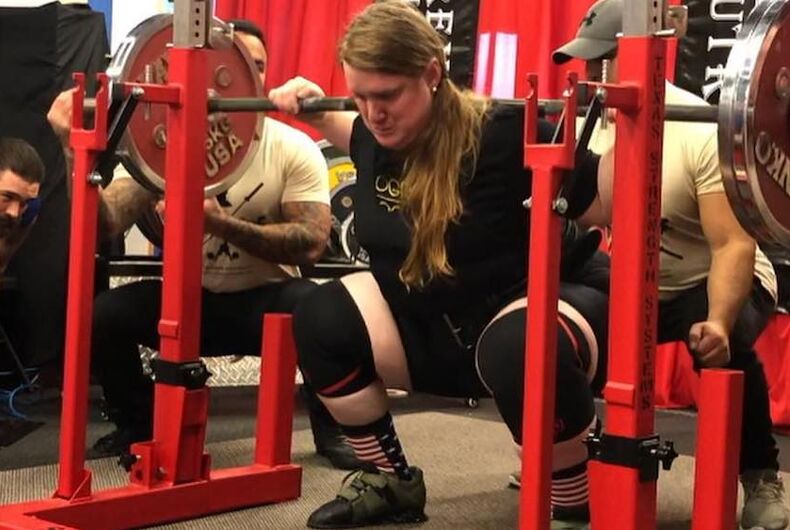 When trans female competitor lifter JayCee Cooper applied to compete in a Minnesota USA Powerlifting event, the group rejected her application stating, “Transgender male to female individuals having gone through male puberty confer an unfair competitive advantage over non-transgender females due to increased bone density and muscle mass from pubertal exposure to testosterone.”

Outsports co-founder Cyd Zeigler writes that the “’bone density’ red herring” is often used to disqualify trans women from competing even though the bone density of some black women has been found to be higher than that of white men. Lots of factors affect bone density and that alone shouldn’t be worth disqualification.

In short, this isn’t about bone density — it’s about disallowing trans women from competing.

While other sporting organizations have struggled to create fair guidelines for trans competitors, USA Powerlifting might want to consider how the International Olympic Committee (IOC) has handled the issue.

NewNowNext provides a quick history of the IOC’s trans policies:

Trans athletes who underwent gender confirmation surgery were first allowed to compete in the 2004 Winter Olympics, provided they had been on hormones for at least two years after surgery and legally changed their gender. In 2015, the surgical requirement was dropped and the period on hormones was lowered to a year. Still, to date, no openly transgender athlete has competed in the Olympics.

The IOC also requires athletes to stay within their chosen gender identity for four years during their competitive period, hoping to dispel any worries that someone might claim trans identity just to gain a competitive edge.

But the IOC is far from perfect or consistent. Last year, the IOC issued new guidelines halving the amount of testosterone allowed in trans women’s blood. Not only could this disqualify some trans women from competing, but genetic issues can cause elevated testosterone levels in cisgender women too, showing the inherent unfairness of their revised policy.

In the 2018 documentary Man Made, trans male bodybuilder Mason Caminiti had to compete in an Ohio bodybuilding competition while keeping his trans identity a secret, lest he face disqualification. He ended up placing third in the bantamweight division and fifth in masters.

Imprisoned, anti-LGBTQ Oklahoma senator has to pay $125,000 to the teen male prostitute he hired