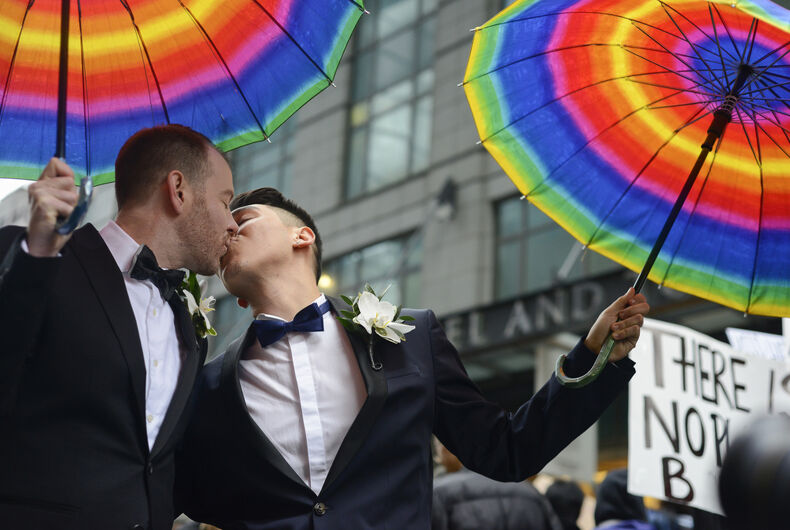 In this chart posted by Huneke, the percentage of gay or LGBTQ support for various right-wing parties is shown in the second column. The right-most column shows whether gays and LGBTQ people supported these candidates more often than straight voters (green) or less often (red).

Huneke looked at voting data from 14 elections in five Western countries — the US, UK, France, Germany and Brazil — and then published a recent article on the troubling phenomenon. It it, Huneke observed:

For example, a 2015 French poll showed 26% of gay and bisexual male voters supporting Marine Le Pen, the anti-gay politician with the far-right National Front party — only 16% of straight voters supported Le Pen. That same year, 38% of gay male couples voted for Le Pen’s party whereas only 29% of straight couples did the same.

Huneke notes that in France and Brazil’s run-off presidential elections, the far-right politicians in each of those two-person races each received a substantial fraction of the gay male vote. In the UK, 26% of LGBTQ voters supported the Conservative Party.

This isn’t a formal study and Huneke states that the polling around this issue is slim, so we can’t draw overarching conclusions. For example, in Germany, Huneke admits the picture is hazier: Only 2.7% of LGBTQ voters supported Germany’s far-right, homophobic party Alternative for Germany (AfD).

Related: The founder of ‘Gays for Trump’ got trounced in his North Carolina election

But even still, Huneke thinks that when gay men are studied as an individual group, substantial numbers of them vote right-ward. He says this isn’t true in America where the GOP’s longstanding opposition to HIV-related healthcare, marriage equality and other LGBTQ civil rights have driven majorities of gay voters into the Democratic tent.

But in other Western countries lacking the same two-party system of villains and heroes, the gay vote doesn’t always lean liberal.

“Gay politics in other countries prove that LGBT people — especially gay men — are not inherently progressive voters. Give them the chance and they will vote for xenophobia, for racism, and for misogyny. Democrats (and progressive parties in other countries, for that matter) cannot and must not take the gay vote for granted,” Huneke concludes.

USA Powerlifting has banned all trans women from its competitive events