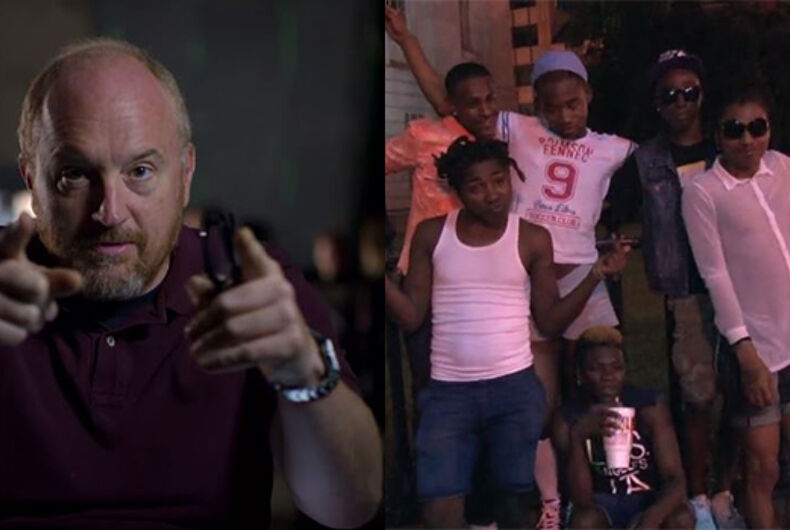 Louis CK has released another film through his website, but this one is quite different from those earlier offerings.Photo: Screenshot

Louis CK announced via email to fans on Friday that he was offering a new film on his website, which he has used to release some of his own material as well as the work of others, such as Todd Barry and Tig Notaro, about an LGBTQ street gang in Washington, D.C.

The documentary, Check It, directed by Dana Flor and Toby Oppenheimer, follows the members of the gang, formed to protect against anti-LGBTQ violence, as well as the danger of living on the streets in an environment that can be dangerous even for straight, cisgender people.

In 2005, a small group of middle schoolers banded together in a group they dubbed “the Check-it.” The concept was that there’s safety in numbers, and the numbers have grown since then to include over 200 members.

They are willing to fight back against harassment and abuse.

“If you don’t stand up for yourself, nobody will,” says one member, in the trailer.

Steve Buscemi is an executive producer on the film, and he invited his Horace and Pete co-star to a screening.

“The film knocked me right over,” CK wrote. “It was an amazing emotional ride.  It was funny and moving, I learned a lot and it gave me a lot to think about after.”

“It’s not an easy film. It takes on life right where the rubber hits the road,” he added. “What made me love it was just the kids themselves. They are like any kids, like anyone’s children. They are trying to cope against terrible odds, they are funny and full of hope and life. Their lives are difficult and complex. They are very generous in sharing this with the filmmakers and you, if you watch the film.”

“Look, I know this isn’t what you’re expecting from me,” he continued. “Nor am I the guy you’re expecting to get this film from. I guess that’s why I’m doing this. When I saw this film, I knew that no one I know will ever see it. Documentaries are MUCH harder to make than the things that I do and they are FAR more expensive to the filmmakers in terms of their time and their lives and their emotional energy. And nobody much watches them. Those who do watch documentaries are usually people who are likely to be interested in the subject they cover already. But what a great value there is in showing people films about something that just isn’t on their radar.”

Check It is available at louisck.net for $5.

CK appears in a newly released trailer for the film, which you can find below.

You can watch the original trailer as well, below.

CHECK IT Trailer from fungible on Vimeo.