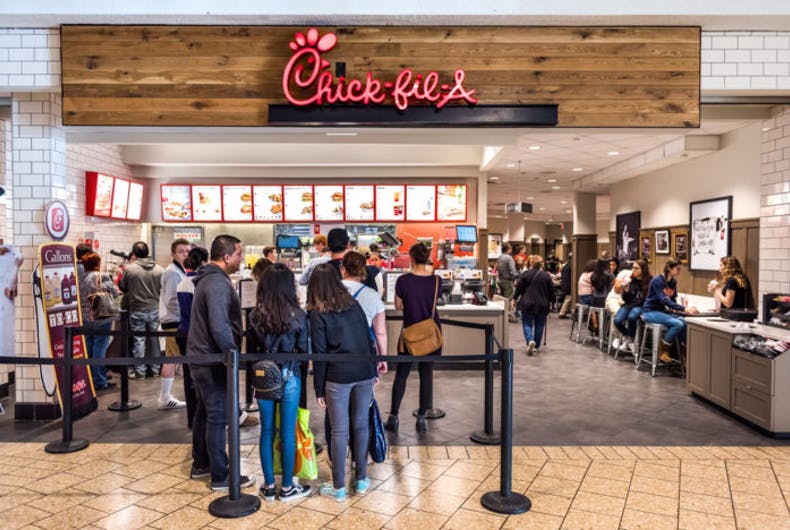 Chick-fil-A just can’t stop talking about LGBTQ issues. For a company that repeatedly claims they aren’t antigay, they continue to make donations to groups that actively discriminate against LGBTQ people and wrap their founder’s religious beliefs around them as a shield as controversy continues to rage year in and year out.

It’s almost as if they realize the more they continue to push the idea, the more conservatives will flock to their fast food outlets while progressives beat their chest and rend their garments on social media while still pulling through the drive-thru for some waffle fries and a fried chicken sandwich.

“There’s a calling to help people, and I think at times that has been confused with a calling, somehow, to exclude,” the head of the company’s charitable foundation, Rodney Bullard, told Business Insider. “And that’s not the case. The focus, the phrase ‘every child’ — we’re very intentional about that. We do have programs and we look for programs that are inclusive as well to help every child.”

The media first reported on Chick-fil-A’s anti-LGBTQ donations in January 2011, when several large donations to anti-LGBTQ organizations like Family Research Council and the conversion therapy group Exodus International were uncovered.

The company’s CEO, Dan Cathy, said that they were “guilty as charged” when it came to homophobia.

Despite some attempts to clean up their image, Chick-fil-A has continued to donate to organizations that discriminate LGBTQ people and that have official anti-LGBTQ policies, until as recently as 2017.

When the company is questioned about it, they usually give a vague statement about how they “embrace all people,” regardless of “sexual orientation or gender identity.” This sort of rhetoric, combined with their donations, helps paint them as the victims of radical leftist LGBTQ activists, trying to be fair to everyone while staying true to their Christian values.

It’s the kind of wink and nudge that appeals to people who don’t like LGBTQ people but want to be seen as respectable, which may be why people who hate LGBTQ people often vocally support Chick-fil-A.

“For us, it is a much higher calling than any political or cultural war that’s being waged. This is really about an authentic problem that is on the ground, that is present and ever-present in the lives of many children who can’t help themselves.”

The religious right has flipped its lid over a cartoon rat