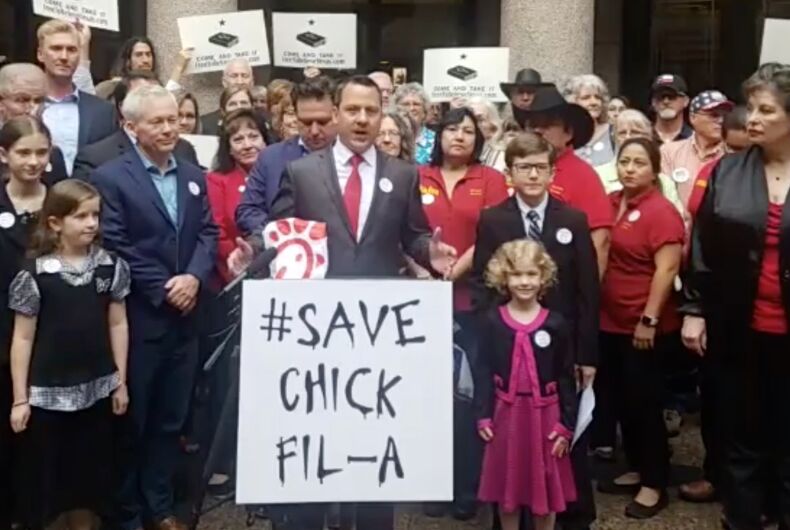 Members of the conservative Christian group Texas Values held a “Save Chick-fil-A Day” to advocate for legal discrimination against LGBTQ people. The chain is doing fine financially and does not require “saving.”

The far right org capitalized off the recent decision by the San Antonio city council to ban the notoriously homophobic fast food chain from opening a franchise in the local airport. They used the controversy to try to gin up support for a pair of bills that would give Christians a license to discriminate against LGBTQ people if they cite religion as their motivation.

While the group spewed their reasons why LGBTQ people don’t deserve the same rights they enjoy, Republican Senator Ted Cruz showed up to give the far right protestors support.

Opponents of the legislation also rallied at the Statehouse that day, lobbying elected officials to vote down the bills. Samantha Smoot, Equality Texas Interim Executive Director, pointed out that activists have a hard road ahead to defeat the proposed legislation.

With the state firmly in far right Republican control, lieutenant governor Dan Patrick holds a lot of sway. Patrick has gone out of his way to oppose pro-LGBTQ moves and promotes measures that would actively harm the community.

“LGBTQ Texas are vital members of every community in Texas, and deserve the same opportunities as everyone else, to live, work, and contribute to this state,” said Samantha Smoot, Equality Texas Interim Executive Director. “But these most basic rights are again under attack in the Texas legislature. Under the leadership of Dan Patrick, the Senate has already passed, as of last night now, five anti-LGBT bills.”

Chick-fil-A has spent years trying to downplay these donations, saying that they “will treat every person equally, regardless of sexual orientation” and that the company’s charity arm “is now taking a much closer look at the organizations it considers helping, and in that process will remain true to its stated philosophy of not supporting organizations with political agendas.”

But that hasn’t stopped them from donating to anti-LGBTQ organizations. The company’s charity gave $1.8 million in donations to anti-LGBTQ groups in 2017 alone.

LIVE from the Capitol for #SaveChickfilA Day!

LIVE with Senator Ted Cruz in support of #SaveChickfilA Day

We're live from the Capitol for a good, bad and ugly day of legislation. First up, a briefing on religious exemptions bills that would let people use religion as the excuse for discrimination.

A DC beer company will be honoring Marsha P. Johnson for Pride this year

Charlize Theron announced that her 7-year-old is transgender