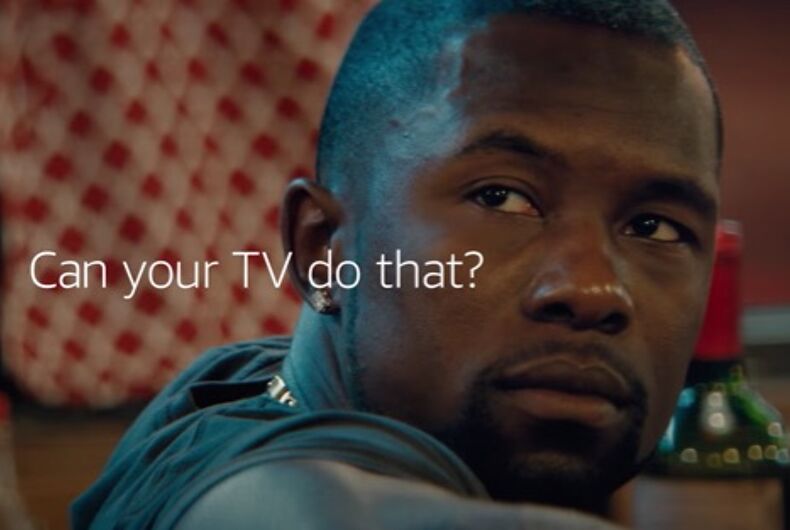 Advertisers came after our money in 2018. Here are some of the ads they used.

OKCupid released a series of ads that were plays on the expression DTF (down to fuck). There was a lesbian ad, and one of the lesbians had four arms.

A lot of people were confused by this. Maybe it’s about how one set of hands is “down to fuck” while the other is “down to fall head over heels.” Maybe it was a play on “4 play.” Or maybe it was an editing error that no one caught.

Either way, dating apps could do a lot worse, and it’s cute.

Late last year, Australia recognized marriage equality after a national referendum showed that an overwhelming majority of Australians supported it.

In February, Apple put out this ad that was ostensibly for its iPhone X. It showed a lot of images from actual couples’ first dances at weddings.

Samsung sponsored Olympic skier Gus Kenworthy, and they released an ad with a letter of support from Matt Wilkas, Kenworthy’s boyfriend.

Sunsilk shampoo in Thailand had an ad this year that featured model Rock Kwanlada… well, her hair.

Her hair talked about her journey to womanhood and her fears of being rejected by her family.

Whether this is a direct reference to the Sunsilk ad from June, Pantene Philippines released an ad in December that told the story of a transgender model’s journey to womanhood, in this case Kevin Balot.

6. McCain potatoes runs a lesbian ad, even after a gay ad got hate mail

In 2017, an ad for McCain potatoes in the U.K. featured a gay couple and received a lot of hate mail.

But McCain wasn’t deterred, and in 2018 they ran an ad that had a lesbian couple in it.

The ad was pulled from YouTube due to copyright concerns related to the music.

7. Amazon shows a gay couple getting ready for their wedding

This ad for Amazon’s Fire TV shows a scene from Moonlight, while a male couple can be heard preparing their wedding playlist.

Gilead was specifically trying to reach LGBTQ people, especially LGBTQ people of color, with this ad.

9. Coca-Cola shows some LGBTQ diversity in a Super Bowl ad.

The over 100 million Super Bowl viewers earlier this year heard an ad that referred to a person as “them.”

Coca-Cola kicked off its “A Coke for Everyone” campaign with one of the few ads that refers to nonbinary people… and it also showed two loving women in a swing together.

Coca-Cola pulled the ad from its social media but it can still be seen on AdWeek.

Judging by the reaction on social media to this Dr. Pepper ad, people didn’t really get it.

But, er… points for trying?