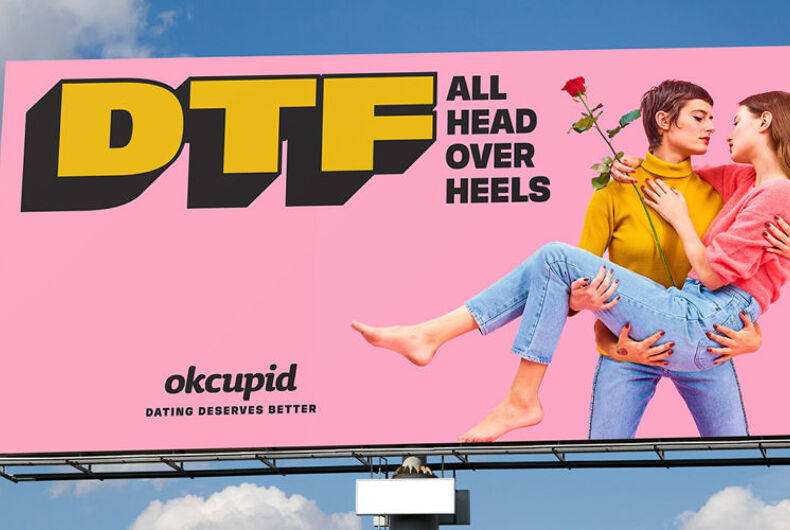 Dating site OKCupid is DTF in their new advertising campaign, but it’s probably not what you think.

While the acronym normally stands for “down to fuck,” the campaign lifts it beyond casual hookups to proclaim “Dating deserves better.” Instead of making the ads about sex, they substitute fun words and phrases for the F.

And these aren’t your usual run-of-the-mill pearl clutching generic substitutions either. The creative campaign from Wieden + Kennedy New York is pointed, modern, and humorous.

“Down to feel fabulous,” proclaims one ad showing a man wearing nail polish. “Down to four twenty” says another that features a couple who has smoked pot floating in the air. And on a more serious note, the ad showing a cute lesbian couple reads, “Down to fall in love.”

“In the current political and social climate, we felt a responsibility and saw an opportunity to play a part in changing the conversation about dating culture and empowering each individual to reclaim the meaning of DTF and make it theirs,” OkCupid CMO Melissa Hobley told AdWeek.

“The response to this blew us away, and most importantly, signaled how important it was for people to be able to talk politics in dating.”

“We set out to really explore what happened to chivalry and courtship and how modern-day dating seemed to be on a bad trajectory,” says W+K copywriter Ian Hart told the site.

“When we say dating deserves better, what we’re really saying is people who date deserve better. Because I mean, they really do. Modern dating treats emotions like a disposable commodity. Anyone who’s been single knows this. It’s an aspiration to treating people like people.”

The dating site may not have redefined DTF yet, but the ads are definitely a leap above the run-of-the-mill heteronormative schlock. Check some of them out below, and head over to AdWeek to see the rest.