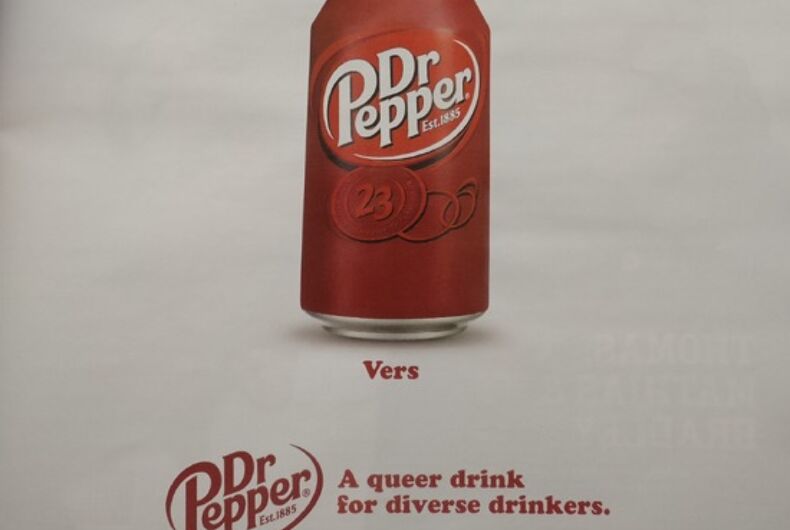 A cheeky new ad reportedly released by Dr Pepper has taken the internet by storm.Photo: Twitter

In a bold new ad, Dr. Pepper joins the ranks of companies capitalizing off the LGBTQ community, but in such a cheeky way that it’s impossible to give them stink eye. The strange soft drink from Texas has come out as queer. And “vers.”

As you can imagine, the web lit up as the ad went viral. While some responses varied to the ad, one big question remained: Is it real?

So far, it’s been suggested that the advertisement is out of Sweden, but there’s been no confirmation as yet. A request for comment from the soft drink company was not returned. The mystery lives on.

Until then, you’ll have to wonder. And isn’t that the point of Dr. Pepper? You’re always left wondering what the flavor of the drink actually is. Cherry? Cola? Licorice? Let’s just go with “vers.”

The reactions to the supposed ad were mixed, but c’mon, real or fake, this is brilliant.

I thought Dr Pepper was a woman.

second of all, if you wanna ally fr, why not make the ad show something more tasteful like oh idk Captain Morgan topping Dr Pepper? anything

But I would love to know where other drinks fall in the "top/bottom/vers" scale. Sierra Mist is definitely a bottom (and a twink), Diet Coke is the most powerful power bottom, Coke is a top, and water is truly verse.

Trans performer Kate Bornstein heckled on Broadway, but the response will warm your heart