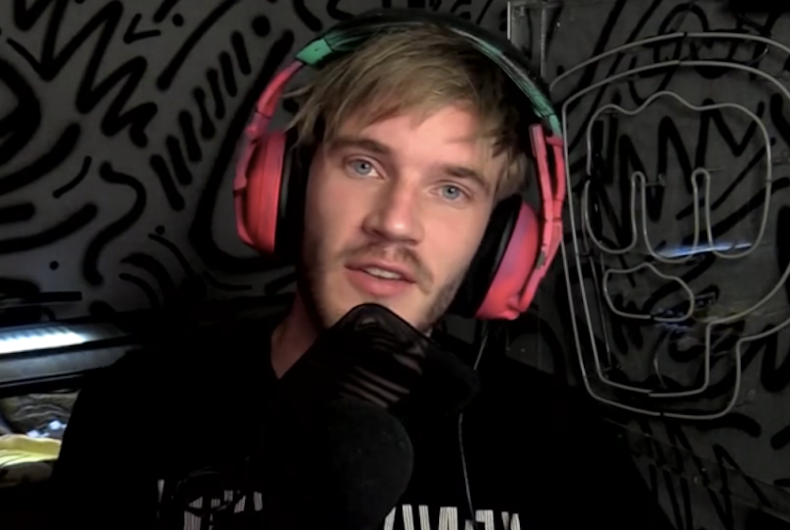 The 29-year-old Swedish YouTuber PewDiePie (real name Felix Kjellberg) is currently the YouTuber with the most subscribers — nearly 79 million. He also has a history of making, and subsequently apologizing for, anti-Semitic statements, saying the N-word, and, most recently, promoting the YouTube channel of someone who uses anti-Semitic, sexist and homophobic speech.

Is this a problem?

In a December 9, 2018 video, Kjellberg gave a shout out to YouTuber EsemicolonR (E;R) and 27 other YouTube channels, stating that E;R does “great video essays.”

But whether Kjellberg realized it or not, E;R’s past videos included “jokes” including mocking video footage of Heather Heyer’s murder at the 2017 white supremacist “Unite the Right” rally in Charlottesville, Virginia.

In another 2016 E;R video, entitled “Steven Rapeyverse,” he makes sexist and ableist comments about the LGBTQ-inclusive cartoon series Steven Universe, calling creator Rebecca Sugar “a Jew” and implying that the show’s other male producers are gay for their involvement with it.

Kjellberg has since removed his plug of the channel and released a sarcastic video defending his oversight.

But Kjellberg’s plug of an anti-Semitic channel is most troubling considering his past flirtations with anti-Semitism and anti-LGBTQ speech.

In 2017, he lost a broadcast deal with Disney and lost a prospective YouTube series after it was revealed that “nine of [his] videos posted over the last six months featured imagery including swastikas, Nazi salutes, and shots of Hitler.” One of the aforementioned videos included poor people that Kjellberg had hired to hold up signs saying “Death to all Jews” and “Hitler did nothing wrong.”

Kjellberg later apologized for these videos as well as some of his other past work that also made anti-LGBTQ jokes. Three of his more anti-Semitic videos were pulled from YouTube, but the others remain.

In his 2017 apology for the anti-Semitic videos, Kjellberg claimed to be “no way supporting any kind of hateful attitudes,” adding, “I make videos for my audience. I think of the content that I create as entertainment, and not a place for any serious political commentary. I know my audience understand that and that is why they come to my channel. Though this was not my intention, I understand that these jokes were ultimately offensive.”

But while there’s financial pressure for Kjellberg to quickly put out content that appeals to his younger male viewers, he must also understand that joking about and promoting such content encourages his audience to see it as “funny” rather than serious, hateful or potentially deadly.

Studies have shown that YouTube is helping breed white nationalists for profit’s sake. By passing off his own endorsement of hateful content as “jokes,” Kjellberg is contributing to the problem, whether he means to or not.