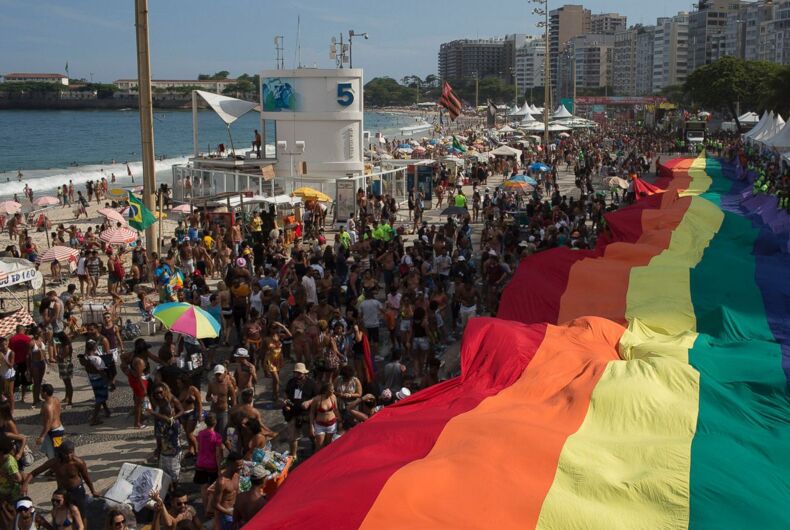 A man who identifies as a goth and a vampire is pushing for the inclusion of a black stripe on the LGBTQ pride flag because he feels underrepresented.

Darkness Vlad Tepes (real name, legally changed) sleeps in a coffin, drinks animal blood and human blood substitute, and has said he feels picked on because of his goth identity.

The flag, designed by the late Gilbert Baker, features the colors red, orange, yellow, green, blue and purple, and initially included the colors hot pink, indigo, and turquoise (the latter two were combined to royal blue).

Philly Pride already beat Tepes to the punch, by adding a black and brown stripe to the flag, with its #MoreColorMorePride campaign last year. Those stripes were added to represent black and brown people within the LGBTQ community.

It proved controversial, but also inspired The Victorian Pride Centre, in Melbourne, Australia, to follow suit.

“Very few goths are ever seen in the gay community but when they are they are not always welcomed due to their dark gothic fashion,” Tepes claimed. “Gothic intent is to dress black and in black. It’s easy to see that the current colors in the gay flag don’t really represent the gothic community. With a black stripe we will be treated as equals within the gay community.”

“Gay people are already accepted within the gothic community, only we don’t have a flag,” he added.

“We wish the gay goth community well but our view is that the rainbow flag already reflects the full diversity of LGBT people,” said Nigel Evans, a Lancashire LGBT charity representative. “We do not need to add further colors to differentiate gay goths.”

A word of advice for Tepes: You don’t need to add stripes to the pride flag to have a gay gothic flag. There are plenty of subgroup specific LGBTQ flags out there, so all it takes is getting a bit creative. Like, say, more creative than just throwing an extra stripe onto a preexisting flag.

Is Scott Pruitt the most homophobic member of Trump’s cabinet full of deplorables?