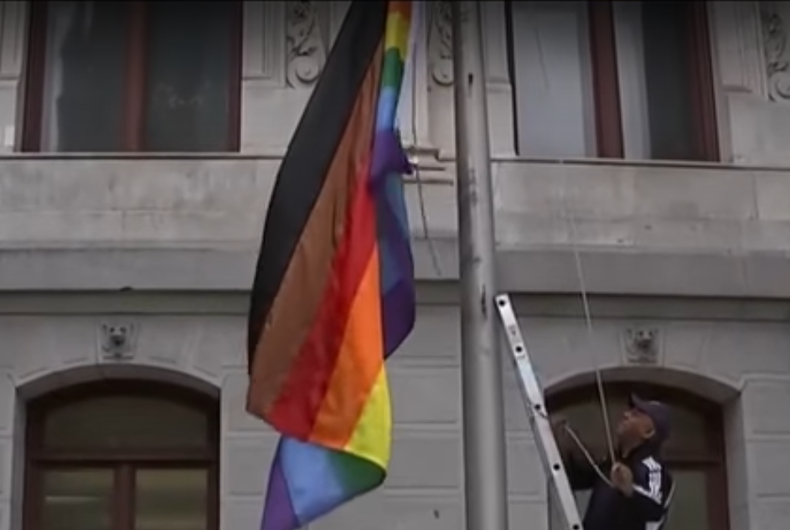 It’s an interesting time to be an LGBT Philadelphian.

The city kicked off Pride Month with the introduction of a new pride flag. The new design includes two additional stripes, one black and one brown, to symbolize the inclusion of LGBT people of color.

While I think it’s a given that the inclusive values behind this idea are shared by the vast majority of the city’s queer community, no one at the Philadelphia Office of LGBT Affairs apparently felt it necessary or even just a good idea to bother finding out if this was something the community actually wanted.

The new design was kept secret from the Philly LGBT community at large until it was revealed on June 8th, and it’s pretty obvious why the Office of LGBT Affairs chose to do so. Taking the time and making the effort to get input on the move from the community this flag represents would have necessarily carried the very real risk that a significant portion of the community would have opposed the move. That is, however, how truly inclusive movements are supposed to work: when there are decisions to be made that impact everyone, everyone gets a say.

We are right now several months into the most authoritarian presidency in American history, saddled with a federal government that makes it clear that it considers LGBT Americans to be second-class citizens, unworthy of the freedom to control even such basic aspects of our lives as choosing who we marry, where we live and congregate, what government services we can access, or even where we go to the bathroom.

Philadelphia, a city that’s considered one of our country’s most progressive, unilaterally decided to significantly alter one of the LGBT community’s most cherished symbols without bothering to seek any input at all from the community at large. As much as I can appreciate and support the sentiment behind it, the way this went down was anything but inclusive.

Personally, had I been asked, I’d have voted no. Symbols are about meaning and aesthetics. The rainbow flag is by definition inclusive and always has been. Its brightly colored stripes already have specific meanings, and none of them have anything to do with race. Taken as a whole, it’s well-known what the rainbow flag means and that it represents the entire LGBT community.

There’s no question that Philadelphia is a racially-divided city in many ways, not the least of which are the ways in which our LGBT community interacts socially and politically. There’s also no question that trans Philadelphians often don’t get the same opportunities and consideration as our cisgender peers, yet no one’s arguing that we should add a stripe for trans people too.

That’s probably for a pretty obvious reason. Trans people have already had our own flag for many years, one which has flown in front of Philadelphia City Hall and at other important locations nationwide. Its colors have been projected on significant national landmarks like the San Francisco’s City Hall and the Well Fargo tower in Charlotte.

A new flag representing LGBT people of color I could fully get behind and support. The addition of black and brown stripes to an otherwise brightly colored symbol of the entire American LGBT community, not so much. As symbols go, rather than signal inclusiveness, the new stripes don’t mesh well at all artistically with the rest of the flag and thus imply exactly the opposite.

To me, what the Philadelphia Office of LGBT Affairs is doing here is like having a car in desperate need of engine repair and bringing it in for a paint job. It might make you feel better in the short term, but it doesn’t do anything at all to help address the actual issues you’re having. That can only be accomplished by going under the hood and working on the real problems.

There’s no doubt that there’s work to be done if the kind of progress we all seek is to be made. Real work, hard work, the kind of work that involves those who truly care about creating the kind of Philadelphia LGBT community that serves, honors, and respects all who are a part of it and want to see it become the very best that it can be for all of us. Adding a couple of new stripes to a flag that’s been around for decades isn’t going to accomplish that.

The parallels between today and Nazi Germany are striking