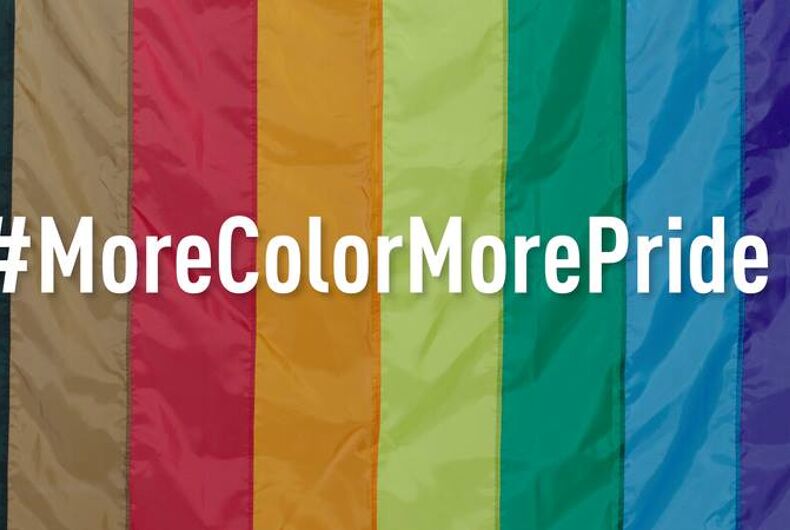 A graphic in support of Philadelphia's updated pride flagPhoto: Amber Hikes via Facebook

Philadelphia raised a brand new Pride flag yesterday featuring brown and black stripes as a symbol of the City of Brotherly Love’s embrace of LGBTQ people of color.

The 10-stripe flag is reportedly the first Pride flag flying over a U.S. city to recognize queer people of color. The flag was designed in conjunction with the city’s Office of LGBT affairs and is part of the larger #MoreColorsMorePride campaign. It’s also part of the city’s ongoing effort to address concerns about racism in Philly’s gayborhood and LGBTQ businesses.

“In 1978, artist Gilbert Baker designed the original rainbow flag. An iconic symbol of LGBTQ+ unity. So much has happened since then. A lot of good, but there’s more we can do. Especially when it comes to recognizing people of color in the LGBTQ+  community,” the #MoreColorMorePride campaign says. “To fuel this important conversation, we’ve expanded the colors of the flag to include black and brown. It may seem like a small step. But together we can make big strides toward a truly inclusive community.”

When Baker first designed the iconic symbol 39 years ago, it included eight colors, each with a specific meaning: hot pink stood for sexuality, red for life, orange for healing, yellow for the sun, green for nature, turquoise blue for art, indigo for harmony, and violet for spirit. And while those broad concepts can apply to anyone, it’s no secret that people of color have not always felt welcome in the LGBTQ community.

This reality has come into stark focus in Philadelphia over the past year. The city has stepped up its focus on addressing racism after video surfaced of a gay bar owner using racial slurs. Philly gay bar staff were required to participate in anti-discrimination trainings after a report found that racism, sexism, and transphobia were rampant in the city’s gayborhood. And the city hired a new LGBT liaison.

Watch the flag raising below. And get your own inclusive rainbow swag (or get templates to make your own) here.

Sean Hayes & Debra Messing want you to march this Sunday