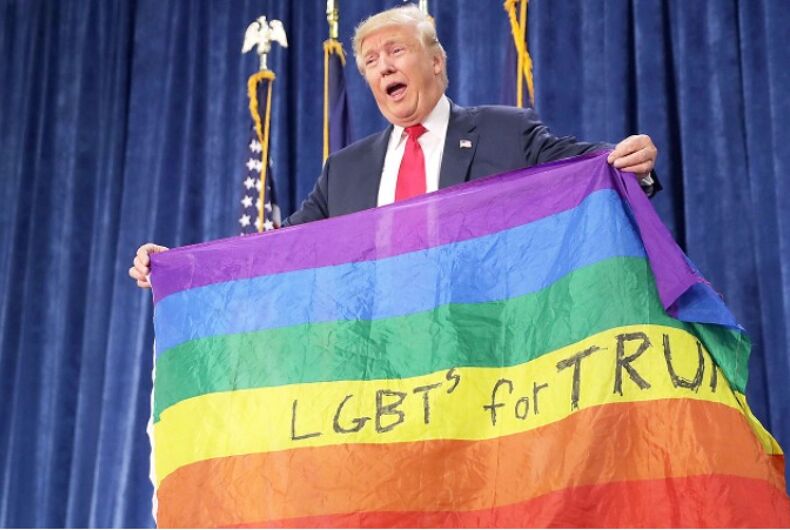 The Trump administration has been anything but kind to the LGBTQ community overall. After claiming he would be a friend, Trump showed himself to be the adversary that all but a slim minority of LGBTQ people predicted.

The administration is on the side of those who wish to fire LGBTQ people for their sexual orientation or gender identity. Trump is still trying to keep transgender people out of the military, as now four federal courts have slapped down that attempt.

The Trump administration even went so far as to ensure that a pride flag wouldn’t fly on federal property, at the Stonewall National Monument on National Coming Out Day.

One of the most heartbreaking stories of 2017 were reports of an anti-LGBTQ purge taking place in Chechnya, a federal subject of Russia. Gay and bisexual men in particular have been targeted, detained, abused, interrogated, and in some instances killed.

The Trump administration joined other countries in condemning the reported situation for LGBTQ Chechens, with UN Ambassador Nikki Haley’s office releasing a statement in mid-April.

“We continue to be disturbed by reports of kidnapping, torture, and murder of people in Chechnya based on their sexual orientation and those persecuted by association. If true, this violation of human rights cannot be ignored – Chechen authorities must immediately investigate these allegations, hold anyone involved accountable, and take steps to prevent future abuses,” it read. “We are against all forms of discrimination, including against people based on sexual orientation. When left unchecked, discrimination and human rights abuses can lead to destabilization and conflict.”

However, the United States did not follow the example of countries such as France and Lithuania who have taken in refugees, instead denying visas to gay and bisexual men fleeing the violence in Chechnya.

Attorney General Jeff Sessions surprised many on both sides of the political aisle in May when he said, in a statement in conjunction with the sentencing of the first person convicted on federal hate crime charges for the killing of a transgender person, that the Justice Department, under his leadership, will work to “vindicate the rights of those individuals who are affected by bias motivated crimes.”

Sessions voted against hate crime legislation when he was a senator.

“Attorney General Sessions wasn’t just an opponent of the Hate Crimes Prevention Act, he was probably the most vocal opponent of it in the Senate,” National Center for Transgender Equality Program Director Harper Jean Tobin told LGBTQ Nation. “It is somewhat reassuring that while Attorney General Sessions has apparently no problem with transgender people being fired, or bullied in school, or kicked out of public places because of who they are, he has apparently come around to believing that transgender people should not be murdered in the streets.”

“At the same time, having a long prison sentence in this long running Justice Department case appears to be a cynical ploy to deflect attention from his opposition to basic civil rights with his relentless, racially-tinged drive to promote mass incarceration, as indicated by his changes to Justice Department policies this last week,” she added.

Lambda Legal also expressed a health dose of skepticism in a press release.

“[I]t is the height of cynicism for Attorney General Jeff Sessions to use this – frankly rare – instance of civil rights enforcement under his tenure to deflect from the current department’s sustained opposition to its historic mission,” it said.

“For Sessions now to seek credit for helping prosecute hate crimes against transgender people is akin to him handing out gasoline and matches and then looking for a pat on the back when he prosecutes someone for committing arson,” it added.

Sessions again pledged that the DOJ would fight anti-trans violence at a hate crimes summit in June.

2017 has been the deadliest year on record for transgender people in the United States, with most of the victims of anti-trans violence being women of color.

“On Transgender Day of Remembrance, the United States honors the memory of the many transgender individuals who have lost their lives to acts of violence,” Tillerson said.

“Transgender individuals and their advocates, along with lesbian, gay, bisexual and intersex persons, are facing increasing physical attacks and arbitrary arrests in many parts of the world. Often these attacks are perpetrated by government officials, undermining the rule of law.”

Tillerson added that transgender people “should not be subjected to violence or discrimination, and the human rights they share with all persons should be respected.”

Transgender Day of Remembrance was started nearly 20 years ago, and the Obama White House also marked the event each year with a statement.

This month, Ramzan Kadyrov became one of the latest people to be sanctioned by the U.S. Treasury Department for suspected human rights abuses.

As stated above, Chechnya, under his rule, has been engaged in a sweeping anti-LGBTQ purge. But that’s not what caused him to have his bank accounts in the U.S. frozen and his entry into the country blocked.

Instead, Kadyrov is being sanctioned over the prison death of a Russian auditor and whistle-blower, Sergei Magnitsky, who uncovered a $230 million tax fraud scheme involving Russian President Vladimir Putin and his allies.

“We will continue to use the Magnitsky Act to aggressively target gross violators of human rights in Russia, including individuals responsible for extrajudicial killings, torture, and other despicable acts,” said the director of Treasury’s Office of Foreign Asset Control, John Smith, in a statement.

“Sanctioning those responsible for the horrendous anti-LGBTQ persecution in Chechnya, including Ramzan Kadyrov, is a step towards holding human rights abusers accountable for their atrocities and was a needed action to show that human rights must be prioritized above the personal politics of this administration,” said Sarah Kate Ellis, President and CEO of GLAAD. “We cannot stop here as we face a growing epidemic of anti-LGBTQ violence and discrimination around the world that must be swiftly and fully addressed.”