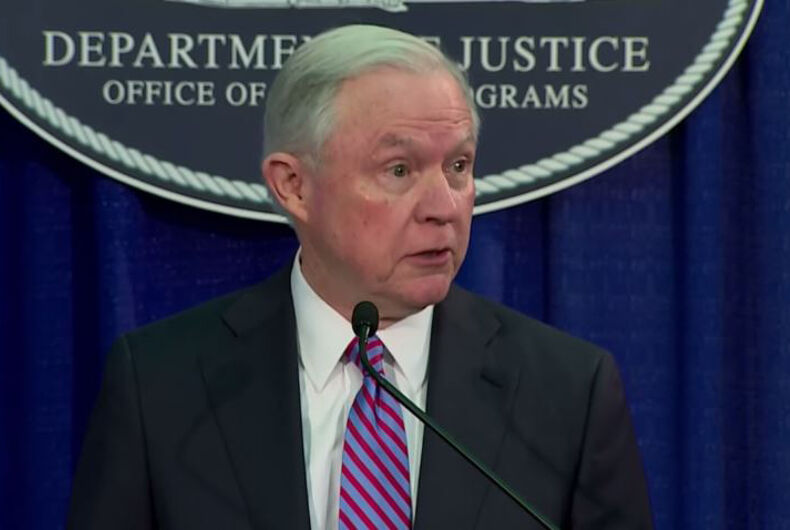 Attorney General Jeff Sessions is reversing an Obama-era policy that said transgender workers are protected from discrimination under a 1964 civil rights law.

In a memo, sent on Wednesday to U.S. attorneys and agency heads and obtained by BuzzFeed News, Sessions clarifies that the Department of Justice will no longer interpret Title IV’s gender protections to include gender identity. It also states that the DOJ will “take that position in all pending and future cases (except where controlling lower-court precedent dictates otherwise, in which event the issue should be preserved for potential future review).”

“Although federal law, including Title VII, provides various protections to transgender individuals, Title VII does not prohibit discrimination based on gender identity per se,” Sessions adds. “This is a conclusion of law, not policy. As a law enforcement agency, the Department of Justice must interpret Title VII as written by Congress.”

“The Justice Department must and will continue to affirm the dignity of all people, including transgender individuals. Nothing in this memorandum should be construed to condone mistreatment on the basis of gender identity, or to express a policy view on whether Congress should amend Title VII to provide different or additional protections,” Sessions writes.

“This Department remains committed to protecting the civil and constitutional rights of all individuals, and will continue to enforce the numerous laws that Congress has enacted that prohibit discrimination on the basis of sexual orientation,” said DOJ spokesperson Devin O’Malley.

Sharon McGowan, a former lawyer in the DOJ’s Civil Rights Division who currently works for the LGBT group Lambda Legal, says the memo ignores legal trends, and argues that the department is trying to roll back the clock on trans protections.

“The Justice Department is actually getting back in the business of making anti-transgender law in court,” she charges, adding that it is simply making policy based on “what the DOJ wishes the law were.”

“According to Sessions, an employer is free to hang a ‘Transgender Need Not Apply’ sign in their window. Fortunately, he is dead wrong on the law,” said Mara Keisling, executive director of the National Center for Transgender Equality, in a statement. “Courts have repeatedly ruled that transgender people are protected by sex discrimination laws in employment, education, housing and healthcare. We’ll see him in court.”

This is not the first time the DOJ has taken the view that Title IV should not cover the LGBTQ community.

In addition to rescinding the Obama-era directive to public schools that they honor the gender identity of students, the DOJ under Sessions argued that Title IV shouldn’t protect a gay employees from discrimination. It also filed a brief at the Supreme Court backing a Christian baker who refused to make a wedding cake for a same-sex couple.

Sessions also recently gave a speech to the anti-LGBTQ think tank The Heritage Foundation about the importance of “religious freedom” (read: allowing religious folks to discriminate against the queers).