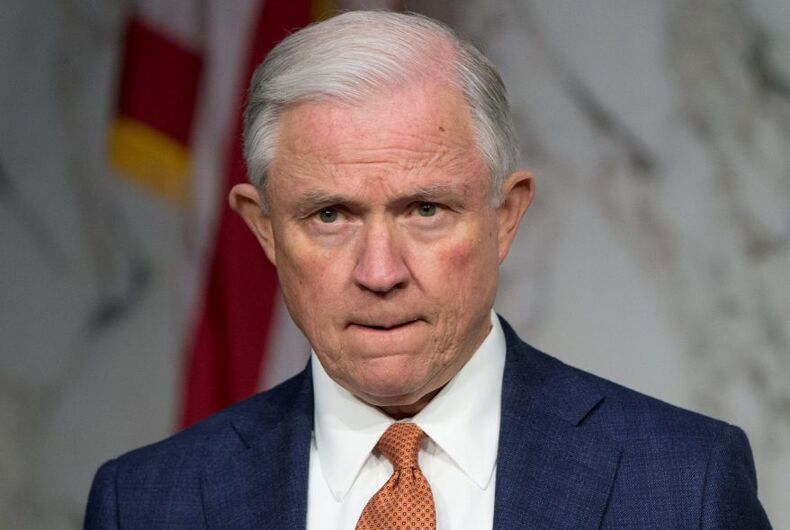 The Department of Justice has intervened in a case they aren’t involved in to file a brief that argues longstanding civil rights law doesn’t apply to sexual orientation.

As we previously reported, Jeff Sessions’ DOJ was expected to make this move, and had to do so quickly in order to beat a deadline.

“The sole question here is whether, as a matter of law, Title VII reaches sexual orientation discrimination,” the brief states. “It does not, as has been settled for decades. Any efforts to amend Title VII’s scope should be directed to Congress rather than the courts.”

On the same day that President Trump announced a ban on transgender soldiers from serving in the military, this White House just took another bold step in laying out its opposition to the LGBTQ community, despite Trump’s multiple attempts to pass himself off as an ally.

Disagreeing with the Obama administration’s understanding of civil rights law, as well as the current U.S. Equal Employment Opportunity Commission, the amicus brief states that sexual orientation should not be considered protected under sex discrimination.

“In one fell swoop, Trump’s DOJ has provided a roadmap for dismantling years of federal protections and declared that lesbian, gay, and bisexual people may no longer be protected by landmark civil rights laws such as the Fair Housing Act, Title IX, or Title VII,” said Sarah Warbelow, legal director for the Human Rights Campaign. “For over a decade, courts have determined that discrimination on the basis of LGBTQ status is unlawful discrimination under federal law. Today’s filing is a shameful retrenchment of an outmoded interpretation that forfeits faithful interpretation of current law to achieve a politically-driven and legally specious result.”

“The Sessions-led Justice Department and the Trump administration are actively working to expose people to discrimination,” James Esseks, director of the ACLU’s LGBT and HIV Project, said. “Fortunately, courts will decide whether the Civil Rights Act protects LGBT people, not an Attorney General and a White House that are hell-bent on playing politics with people’s lives.”

Joint Chiefs chairman: There are no changes yet on trans military service policy