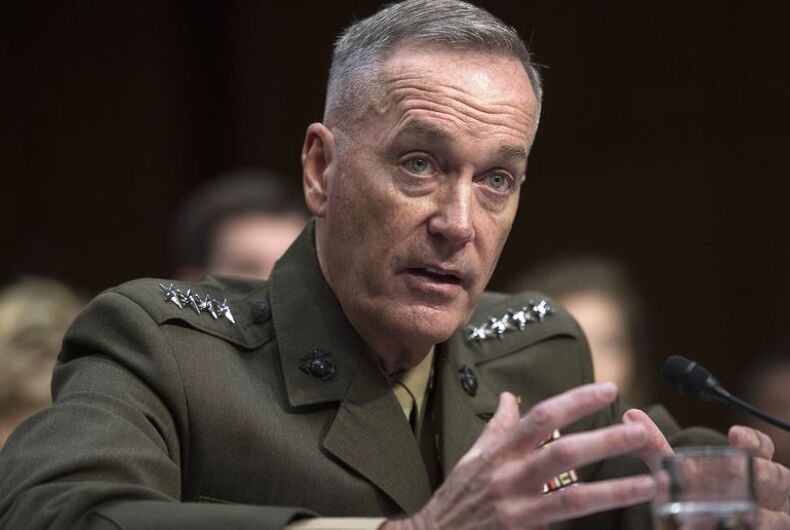 President Trump announced on Wednesday Twitter that transgender soldiers would be banned from the military, surprising many, including many of his own people.

The move was so sudden, that it became clear during the White House press conference that Press Secretary Sarah Huckabee Sanders had no answer concerning how the directive would be followed, including whether trans soldiers currently serving would be kicked out of the military.

So it should come as no surprise that the fly-by-the-seat-of-his-pants president didn’t give anyone enough time to come up with a policy, leaving officials scrambling, including those in the Pentagon who were reportedly taken off guard by the announcement. Top military brass were reportedly blindsided after Trump’s first tweet about the change to policy, thinking he was announcing an attack on North Korea.

Related: Trump sold out the transgender community for his wall

“There will be no modifications to the current policy until the President’s direction has been received by the Secretary of Defense and the Secretary has issued implementation guidance,” chairman of the Joint Chiefs of Staff, Marine General Joseph Dunford, said in a written message on Thursday to service chiefs, Reuters reports.

“In the meantime, we will continue to treat all of our personnel with respect. As importantly, given the current fight and the challenges we face, we will all remain focused on accomplishing our assigned missions,” he added.

“I know there are questions about yesterday’s announcement on the transgender policy by the President,” is how Dunford opened his letter to staff, acknowledging the confusion the president created by his actions.

Meanwhile, he has the audacity to claim that transgender people are the “distraction.” He also cited cost, despite the fact that the cost of providing transgender service members is laughably small compared to what we spend in total on the world’s largest, and most bloated military industrial complex. The military spends five times the amount of money on Viagra for soldiers than it would for transition-related treatment for transgender servicemembers.