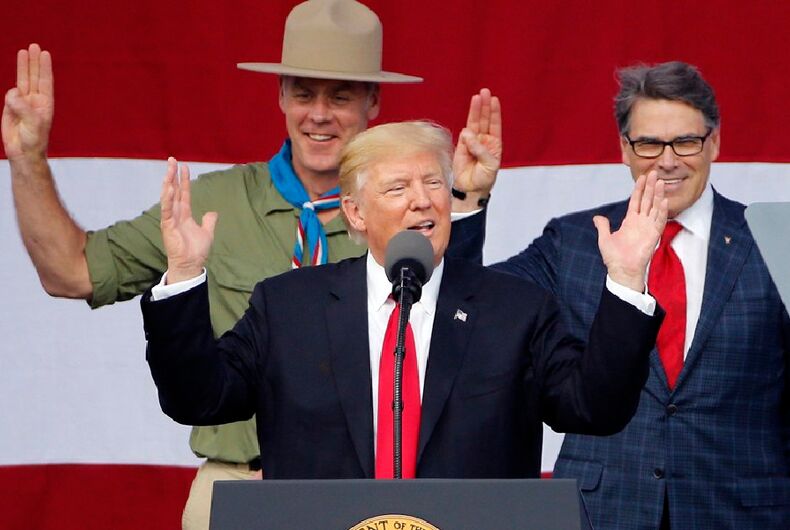 The Boy Scouts of America anticipated President Donald Trump would spark controversy with a politically tinged speech at its national jamboree in West Virginia but felt obliged to invite him out of respect for his office, its leader said Wednesday in his first public comments on the furor over Trump’s remarks.

“If I suggested I was surprised by the president’s comments, I would be disingenuous,” Boy Scouts of America president Randall Stephenson, who’s also the CEO of AT&T, said in a phone call with The Associated Press.

Other U.S. presidents have addressed past jamborees with speeches steering clear of partisan politics. To the dismay of many parents and former scouts, Trump, a Republican, promoted his political agenda and assailed his enemies in his speech Monday evening, inducing some of the more than 30,000 scouts in attendance to boo at the mention of Barack Obama, his Democratic predecessor.

Stephenson noted that every U.S. president since Franklin Delano Roosevelt has been invited to address the jamboree and said the Boy Scouts leadership gave “a lot of thought about Donald Trump coming to speak.”

“Anyone knows his speeches get highly political — we anticipated that this could be the case,” Stephenson said. “Do I wish the president hadn’t gone there and hadn’t been political? Of course.”

Hoping to minimize friction, the Boy Scouts of America, which is based in Irving, Texas, issued what Stephenson called “stringent guidelines” to adult staff members for how the audience should react to the speech.

“You can help make the president’s visit a success by ensuring that any reactions to the president’s address are, as we state in our Scout Law, friendly, courteous, and kind,” the guidance said. “This includes understanding that chants of certain phrases heard during the campaign (e.g. ‘build the wall,’ ‘lock her up’) are considered divisive by many members of our audience, and may cause unnecessary friction between individuals and units.

“Please help us ensure that all Scouts can enjoy this historical address by making sure that your troop members are respectful not only of the president, but of the wide variety of viewpoints held by Scouts and Scouters in the audience tonight,” the guidance said.

Stephenson, who was not in attendance at Trump’s speech, said the guidance wasn’t followed impeccably.

“There were some areas where perhaps they were not in compliance with what we instructed,” he said. “There’s probably criticism that could be leveled.”

Stephenson has been a senior Boy Scout official through several of its recent controversies, including decisions to admit gay and transgender youths as scouts and to accept openly gay adults as unit leaders. He said he wasn’t surprised by the negative reactions to Trump’s speech.

“We anticipated there might be some people upset,” he said.

Would the Scouts invite Trump back to address the next national jamboree if he wins re-election?

“I don’t see why we would break with tradition, whoever is holding office,” Stephenson said. “We are not to going to censor or edit the president of the United States. That’s beyond our pay grade regardless of who it is.”

The controversy occurred as AT&T, which is based in Dallas, is seeking the approval of Trump administration regulators for its proposed $85 billion purchase of Time Warner.