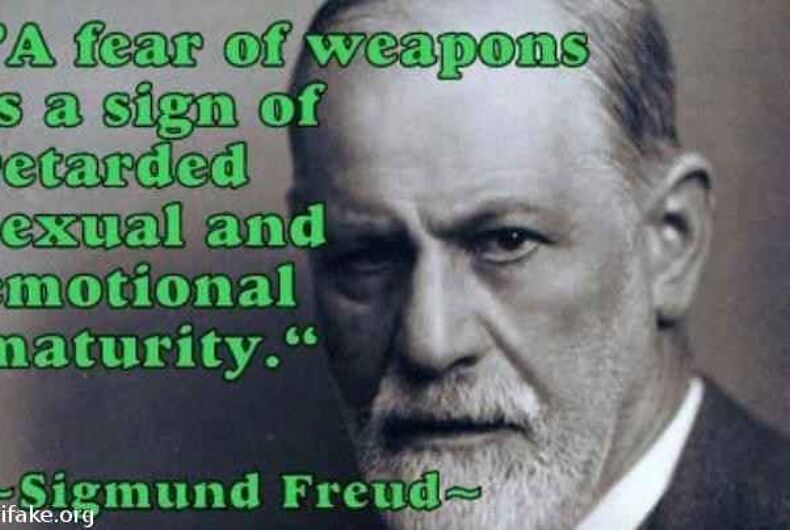 Dr. Sigmund Freud, in his “Introductory Lectures on Psychoanalysis” (1933), expanded his theories on the interpretations of dreams to include weaponry as symbolizing the genitalia, and in particular, the penis. According to Freud:

All complicated machines and appliances are very probably the genitals — as a rule the male genitals — in the description of which the symbolism of dreams is as indefatigable as human wit. It is quite unmistakable that all weapons and tools are used as symbols for the male organ: e.g., ploughshare, hammer, gun, revolver, dagger, sword, etc.”

Along with this, Freud developed his theory of “penis envy” in girls and women. Seeing the father, who has a penis, as the seat of power and authority in the home, stated Freud: “Girls hold their mother responsible for their lack of a penis and do not forgive her for their being thus put at a disadvantage.”

While his theories, especially those relating to females, may seem extremely misguided and misogynistic to many of us now, to Freud, the compulsion to own firearms stems from an unconscious need to compensate for a deep-seated psychological sense of insecurity and inadequacy in terms of power: in males, specifically for having a small or smaller-than-desired penis, and in females, in an attempt to symbolically grow a large penis.

In literature among other fields, this is a common trope. For example, in the 1890 stage play, “Hedda Gabler,” by Norwegian playwright, Henrik Ibsen, the play’s protagonist possesses a pair of dueling pistols formerly owned by her father. Though Hedda marries a man named George Tesman, she holds onto her family name of Gabler. In the Victorian age, guns were seen as masculine objects, and in Freud’s theories, guns symbolized the penis. In this sense, the pistols serve as a continual reminder that she will always be a Gabler like her father, and could likewise indicate that she desires to be a man or even sees herself as a powerful man.

In their effort to counter this societal discourse often circulated by opponents of the sweeping and ingrained firearms culture embedded in the fabric of the United States, many gun rights advocates, members of what I have termed the “Pro-Firearms with No More Regulations Movement,” have attempted to turn the psychological tables by attaching themselves to an alleged statement Sigmund Freud supposedly made, “A fear of weapons is a sign of retarded sexual and emotional maturity.”

The problem for members of this movement, however, is that Freud never uttered these words. Neither this statement nor anything even approaching it appears in any of Freud’s works in any of its translations. It is, rather, a quote falsely attributed to Freud, an opinion now circulating around the internet of Freud’s theories, specifically his tenth lecture, “Symbolism in Dreams,” in General Introduction to Psychoanalysis.

Be that as it may, members of this Pro-Firearms with No More Regulations Movement have embraced a new term – stemming from the (non-) quote attributed to Sigmund Freud — in their attempts to make themselves come across as rational while pathologizing those of us who are working for common sense firearms safety.

Though the term holds no official acceptance within any medical or psychological academy or association, and the American Psychiatric Association has not included it anywhere within the most recent or previous versions of its Diagnostic and Statistical Manual of Mental Disorders (DSM), an American marine, Jeff Cooper, in 1962 coined the term “hoplophobia” (from the Greek ὅπλον – hoplon, meaning  “arms” or “weapons,” and φόβος – phobos, meaning “fear”) to explain a so-called irrational aversion to weapons, or the fear of firearms or of armed citizens.

These hoplophile members of the Pro-Firearms with No More Regulations Movement may actually believe this strategy holds promise in silencing us, and help them to counter the psychological discourse connected to their obsessive attachments to firearms, but it will fail (“hoplophile” — from the Greek ὅπλον – hoplon, meaning  “arms” or “weapons,” and ὅπλον – philia, meaning  “love” or “intense friendship or sexual desire for”).

To paraphrase something else Freud never said or wrote, “Sometimes a cigar is just a cigar” (sorry to expose yet another folk myth), I say simply, “Fear of guns is just fear of guns since we have very good reason to fear guns. They kill! They maim! They permanently disable! And they and unalterably and negatively change lives.”

As a society, we must decide whether we will continue doing things over and over again as we have in the past and expecting different results (Albert Einstein’s definition of “insanity”), of try something new for our country in an attempt to extricate ourselves from the blood bath we ourselves created.