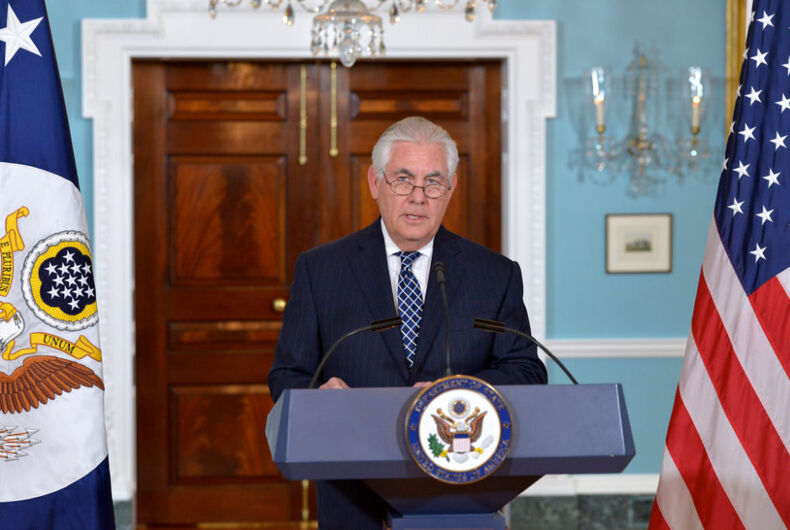 Secretary of State Rex Tillerson condemned violence against the LGBTQI community in a statement acknowledging Transgender Day of Remembrance.

“On Transgender Day of Remembrance, the United States honors the memory of the many transgender individuals who have lost their lives to acts of violence,” Tillerson said.

“Transgender individuals and their advocates, along with lesbian, gay, bisexual and intersex persons, are facing increasing physical attacks and arbitrary arrests in many parts of the world. Often these attacks are perpetrated by government officials, undermining the rule of law.”

This year has been the deadliest on record in the United States for transgender people known to have been killed. There have also been increased crackdowns against the community in places like Chechnya, Turkey, and Egypt.

Tillerson added that transgender people “should not be subjected to violence or discrimination, and the human rights they share with all persons should be respected.”

He also pledged that the U.S. “remains committed to advancing the human rights and fundamental freedoms of all persons. These principles are inherent in our own Constitution and drive the diplomacy of the United States.”

The Trump administration has been criticized for its poor record on LGBTQ rights and issues in general, and against the trans community in particular.

Not only has President Donald Trump attempted to ban transgender people from the military, his administration has also advocated for businesses to have the right to fire LGBTQ people.

It also went to great lengths to make sure the rainbow pride flag wouldn’t fly on federal lands during a ceremony at the Stonewall National Monument.

Transgender Day of Remembrance began nearly 20 years ago, and the Obama White House also marked the event each year.