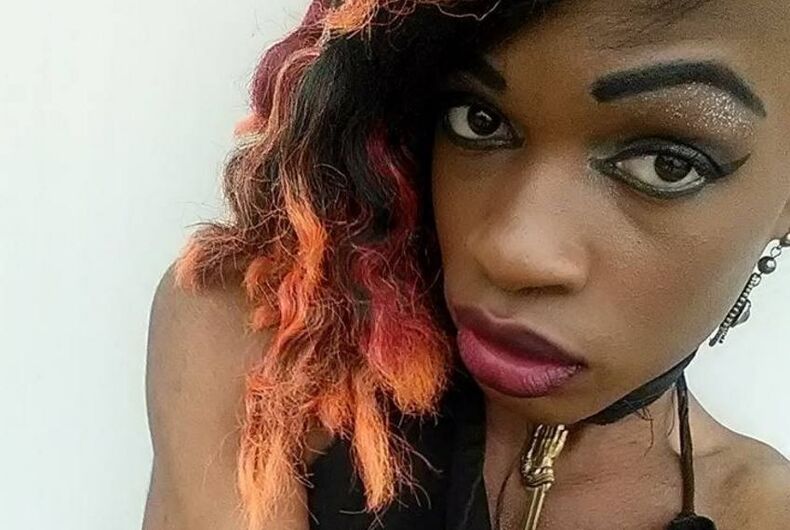 Another transgender woman of color has been reported murdered, two months after she was found dead near San Antonio’s Riverwalk.

Kenne McFadden, 26, was found floating in the San Antonio River on April 9, but because she was misgendered in media reports, transgender advocates were not initially aware of her death.

Police spoke to a former classmate who had recently re-connected with McFadden’s who was surprised to learn she was transitioning, but remembered her fondly.

“[She] would be that shoulder you needed to cry on. Everything you would expect in a friend, it was Kenne,” the friend told KENS 5 (note: that news article misgenders McFadden). “[She was] super outgoing, super charismatic, friendliest person ever, but when [she] needed to, [she] could be assertive when the time came.”

The friend, who asked to remain anonymous, said that San Antonio lost a loyal friend and all-around good person. Other friends remembered McFadden’s big personality and love of singing.

“If you’d given Kenne a chance, [she]’s one of those people you would be so fortunate enough in your entire lifetime to meet. That is a friendship you would want to invest in and you’d hang on to dear life for,” the friend said. “As lovable as Kenne was, I can’t think of any reason somebody would want to harm someone so good.”

The friend added that they hope McFadden’s death, which police ruled a homicide by drowning, was not a hate crime.

According to police, a person of interest in the case is already in jail on other charges.

“There’s a person of interest who’s been interviewed, and it’s just a matter of putting some more details together in the case,” Sgt. Jesse Salame told MySanAntonio.com. “Police plan on arresting him or charging him at some point.”

And while there’s not yet any evidence to suggest McFadden was targeted due to her gender or race, police said they are exploring that possibility.

“If we determine that to be a contributing factor or motive, then we’ll note that appropriately and inform the District Attorney’s Office, which could potentially enhance the punishment [for this crime],” Salame added.

San Antonio’s Riverwalk is generally considered a safe area, prompting questions about how someone could be murdered in such a public place.

“It’s surprising because its one of the more popular areas of the River Walk,” he said. “It’s one of the first homicides in… I can’t even remember the last one there.”