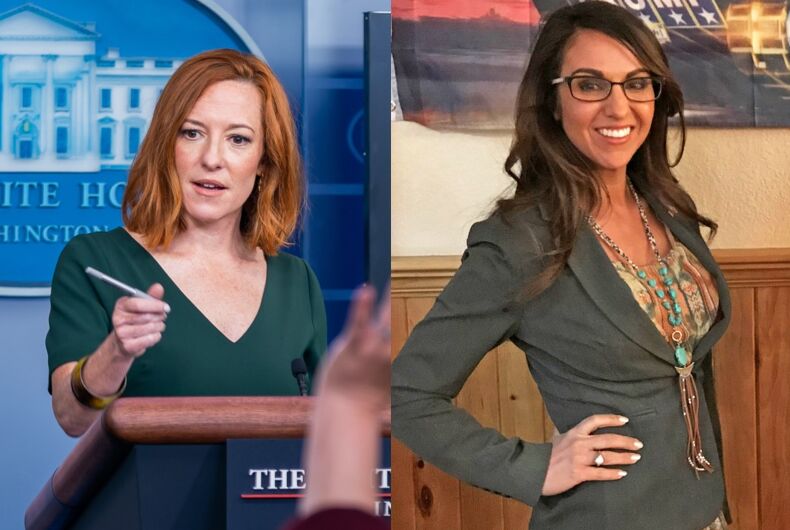 We at LGBTQ Nation have been looking back at the big stories of this past year all month, but this article is about what you, our readers, thought were the biggest stories of the year… or at least what you all clicked on the most.

This post is for LGBTQ Nation‘s fans, a look behind-the-scenes: the 10 stories from 2021 that got the most traffic.

It was a historic moment, for sure.

White House Press Secretary Jen Psaki was responding to a Fox News reporter who asked about criticism of President Joe Biden’s executive order to fully implement the decision in Bostock v. Clayton Co. and ban discrimination against LGBTQ people. The reporter said that transgender rights would hurt cisgender women and asked if Psaki wanted to issue some “clarification” on the issue of equality.

“I would just say that the president’s belief is that trans rights are human rights, and that’s why he signed that executive order,” Psaki replied, making the Biden administration the first presidential administration to make that declaration.

Parents who stand up for their LGBTQ children win our readers’ hearts, and Chris Attig is no exception.

They were testifying at a hearing against a proposed law to ban gender-affirming health care for transgender minors in Arkansas and they talked about their 22-year-old son, who is trans.

Attig’s speech went a little over the two-minute limit – something that they said rightwing organizations were allowed to do at the hearing – and they were arrested.

Chick-fil-A has been caught time and time again donating to anti-LGBTQ causes. So much so that they’ve become a cause célèbre for Christian conservatives.

This time, it was Chick-fil-A CEO and chairman Dan Cathy – whose estimated net worth of over $8 billion comes from the restaurant chain his father started – who was caught donating to some viciously anti-LGBTQ organizations.

Dr. Rachel Levine was nominated to be assistant secretary of health earlier this year due to her deep knowledge of medicine and her work organizing Pennsylvania’s response to the COVID-19 pandemic. She’s also the first transgender person nominated to an administration position that requires Senate approval.

But Sen. Rand Paul (R-KY) only cared about one thing: gender affirming surgery. He opened his questioning of Dr. Levine with the words “Genital mutilation!” and proceeded to berate her about the decisions trans minors and their families make with their doctors, which do not include surgery because trans minors don’t get that kind of surgery.

Dr. Levine didn’t let him get to her and responded simply: “Transgender medicine is a very complex and nuanced field with robust research and standards of care that have been developed.” She knew better than to get into a televised debate about a very complex issue that has little to do with the job she was nominated for.

Her appointment was approved by the Senate and she spent most of the year working to save Americans’ lives.

Rep. Lauren Boebert (R-CO) took office this year and quickly became one of the most outspoken anti-LGBTQ members of Congress.

Even outside of LGBTQ issues, her wild statements earned condemnation, sometimes even from members of her own party.

In August, Boebert compared Biden to the Taliban and decided that the organization overthrowing the Afghanistan government was better.

“The Taliban are the only people building back better,” she tweeted.

5. Queen Latifah is officially out after she sends love to her partner & son during BET awards ceremony

Superstar Queen Latifah, after years of speculation in the media about her sexuality, came out in a heartwarming way by thanking “Eboni, my love” while receiving the BET Lifetime Achievement Award.

In case anyone missed it, she closed her speech with “Happy Pride!”

White House Press Secretary Jen Psaki became the face of the Biden administration just as the country was healing from Trump supporters’ attack on democracy itself when they raided Congress in an attempt to overturn the election.

Since then, she has pushed back against the very sort of resentment and conspiracy theories rightwing media used to get its fans riled up, which often include perceived attacks on their freedom of speech.

This past June, she reminded a Fox News reporter that Black women like Olympic athlete Gwen Berry also have a right to free speech as Fox pressed President Joe Biden to denounce her for her peaceful protest.

3. Lesbian teen who got kicked out by family turns them in as possible MAGA rioters

Speaking of the Capitol Insurrection, lesbian teen Helena Duke got the attention of the entire nation when she sided with democracy instead of her family and publicly disclosed the names of her mother and other family members who were in D.C. around the time of those events.

“Hi this is the liberal lesbian of the family who has been kicked out multiple times for her views and for going to BLM protests to care what happens to me,” Duke wrote before stating the names of her family members, along with screenshots of them in D.C.

2. Lauren Boebert may lose her seat in Congress

Rep. Lauren Boebert (R-CO) was sworn in for her first term in January and quickly established herself as one of the most anti-LGBTQ – as well as racist, pro-gun death, Islamophobic, QAnon-believing… – members of Congress.

So it’s no surprise that LGBTQ Nation readers wanted to learn about how her state of Colorado may redraw its Congressional map in a way that would make it hard for her to be anything more than a one-term Congresswoman.

The most-clicked article of the year is part of a larger story about the attacks on transgender youth that occurred throughout the country.

Over a hundred bills were proposed in state legislatures to take rights away from transgender kids, mostly attacking their rights to participate in school sports and get appropriate medical care. The breadth of the attack was unprecedented and shocking, especially considering how trans youth had been exercising these rights for years in some states without raising a fuss.

Rep. Greg Steube (R-FL) raised the stakes and introduced a bill to ban transgender youth from participating in school sports at the federal level. But since the federal government doesn’t have direct control over education, his bill just threatened to take funds away from school districts or states that protect transgender students’ rights, leaving the question of how, exactly, they go about it to the states themselves.

Considering there a bill in his home state that had a decent chance of passing that demanded girls get genital examinations before participating in school sports, it wasn’t hard to see how some states or school districts – afraid of losing federal funding but left with almost no guidance from Steube – would implement his bill in the harshest way possible if it passed.

It has not passed and it is unlikely to move forward in the Democratic House.

5 good things that happened to the LGBTQ community this year

The sweetest queer love stories of 2021